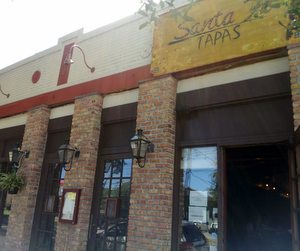 Late last year, the Daiquiri Place Cafe on St. Charles Avenue lost its liquor license amid allegations that it had done too little to control the noise, litter and large crowds that congregated around it on weekends.

At the time, the Daiquiri Place owners argued unsuccessfully that Santa Fe Tapas next door was a major contributor to the problem. Now, attorneys for the city are making a similar complaint, bringing nuisance charges against Santa Fe Tapas before the city’s alcohol board.

The exact nature of the city’s allegations has not been made public. Two charges — “permitting illegal and improper conduct” and “maintaining or creating a public nuisance” — were listed on the docket before the city Alcohol Beverage Control board on Tuesday afternoon, but the city assented to a request from Santa Fe Tapas attorneys to postpone the hearing without commenting on the case.

Neighbors said the problems are similar to those described during the Daiquiri Place hearing last November. The most violent excesses of the past may have abated, they said, but large weekend crowds still dominate the Thalia Street intersection, blocking the neutral ground with motorcycles and driving dangerously and aggressively (even “drag racing”) in the St. Charles Avenue traffic.

Santa Fe Tapas owner Orhan Ergun said in an interview Tuesday evening that he was aware of the stigma surrounding that corner when he opened the restaurant in a previously blighted and vacant space last year. He said he has already begun meeting with city and police officials — voluntarily instituting a policy against drinks to go, even though his zoning does not require it — and was surprised to learn earlier this month that formal charges were being brought.

The restaurant has earned a reputation as one of the premiere locations for small plates and vegan options in the city, Ergun said, and the large gatherings outside have only taken place a handful of times in the last six months, such as on Cinco de Mayo.

“We are not a nuisance, and we have never been a nuisance,” Ergun said. “Guilt by association — I believe that’s what it is, given the location.”

Bret Chittenden of Expotel Hospitality — the management company that represents the owners of the Maison St. Charles Hotel next door — said the noise and congestion may be less now than when the Daiquiri Place Cafe was in operation across the street from Santa Fe Tapas, but the issues have not “dissipated.” The hotel supports the city in any effort to make St. Charles Avenue more attractive to restaurant customers and hotel guests, though he said he would leave the specific solutions up to city officials and Santa Fe Tapas.

“They advertise as a restaurant, and that’s probably what they should be,” Chittenden said.

Who precisely to blame and how to fix the problem drew differing opinions from several other neighboring business owners, who declined to speak about it on the record. One person noted the “No Drinks To Go” signs on the Santa Fe Tapas door and above its drink dispenser, and said that the business appeared to be trying to do better but that lax police enforcement was the problem. Another owner opined that the police do seem to be trying to bring the crowds under control, but it was the responsibility of Santa Fe Tapas to manage their customers.

Santa Fe Tapas continues to meet with city officials and plans several upcoming events to reach out to neighborhood groups, said Brandt Lewis, a spokesman for the restaurant. Ultimately, Lewis said he is confident that the issues and the charges will be resolved without requiring a full hearing before the alcohol board.

The issue is next tentatively scheduled for July 16 on the alcohol board docket.