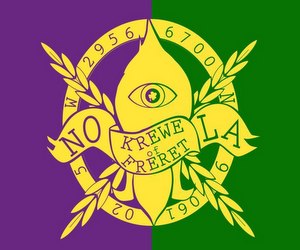 When the Krewe of Freret rolls in 2014, New Orleanians will see the return of a parading group that has been absent from the Uptown route since the 1990s. What they may not see, however, is strands of ubiquitous plastic Mardi Gras beads.

While the krewe hasn’t come to a final decision, co-captain Bobby Hjortsberg told members of The New Freret business and property owners association on Monday that they are strongly considering a ban on plastic beads, instead favoring more unique, locally-made (and locally-purchased) throws that people may find more desirable. The beads are made in China and have little benefit to the economy of New Orleans, Hjortsberg said, and many local parade-goers don’t even bother to pick them up or take them home any more.

Technically, the Krewe of Freret isn’t exactly new, Hjortsberg explained — its older incarnation stopped parading in the mid-1990s, and the current version began being organized in 2011. But when the City Council returns it to the parade schedule for 2014, it will be only the fourth addition to the lineup since the 1990s, following Orpheus, Muses and the 2012 debut of the Krewe of Nyx.

“It was a dream three years ago, and now it’s real,” Hjortsberg said. “It’s happening.”

Dropping the plastic beads may shock some parade-goers, but it won’t be the first parade to do so. Upstart groups like Krewe du Vieux and Chewbacchus already heavily favor hand-made throws over beads, but a better analogue may be this Halloween’s Krewe of Boo, which has already announced a plan to only throw Louisiana-made products.

Krewe of Boo organizer Brian Kern already envisioned that the trend might spread — a prediction echoed by Tulane geographer Richard Campanella — and Freret may take more than just that idea from Boo. Hjortsberg said the krewe is currently considering renting Boo’s floats and repurposing them for their own theme while they are still raising money for their first custom floats, in hopes that the procession will still be new to locals who miss the Halloween parade.

One replacement for beads, Hjortsberg suggested, is that the krewe could partner with Freret businesses to create items emblazoned with their logos, such as key chains or bottle openers, that might become keepsakes. The idea of throws more memorable than beads resonated with the association members.

“Nobody really wants them anyway,” said Kellie Grengs, an association board member (and the 2012 queen of the Krewe of Freret’s inaugural ball) said of the beads. “When you go to parades, they’re all over the ground.”

While the change may plant the seeds of change in Carnival season, it’s unlikely to be noticable on the route. The krewe is tentatively set to roll at 4 p.m. Feb. 22, the Saturday of the first weekend — what could become the busiest day of the season on the Uptown route. The krewes of Pontchartrain and Choctaw will roll at 2 p.m., and Freret will be followed by the Knights of Sparta and the Krewe of Pygmalion that evening, suggesting that ample amounts of plastic beads will still remain for the street sweepers at the end of the night.