“Music is one of the oldest forms of human expression. From Plato’s discourse in the Republic to the totalitarian state in our own times, rulers have known its capacity to appeal to the intellect and to the emotions,  and have censored musical compositions to serve the needs of the state . . . The Constitution prohibits any like attempts in our own legal order.  Music, as a form of expression and communication, is protected under the First Amendment.”

“Noise can be regulated by regulating decibels. The hours and place of public discussion can be controlled.  But to allow the police to bar the use of loud-speakers because their use can be abused is like barring radio receivers because they too make a noise.  The police need not be given the power to deny a man the use of his radio in order to protect a neighbor against sleepless nights.  The same is true here. Any abuses which loud-speakers create can be controlled by narrowly drawn statutes.”

This past week a coalition of thirteen neighborhood groups of varying levels of legitimacy proposed a seven-point scheme for controlling excess “noise” in the City of New Orleans, particularly in the French Quarter.  They claim that their plans are eminently reasonable.  I’ll summarize their proposals.  I’ll leave it up to you to decide whether they are reasonable:

I think my snark is well-understood.  These seven recommendations are not modest proposals.  Rather, they are proposals for a wholesale crackdown on anything vaguely resembling auditory expression.  They are proposals for spending a hefty amount of taxpayer money because some crones in the Quarter have the money and time to play the role of killjoy in what is arguably the nation’s musical capital.  Half of these things are plainly illegal and/or insanely expensive.  It’s the polar opposite of reasonable and scarcely a starting point for negotiations.  This coalition just made an opening bid of three dollars on the Hope diamond.

Because these folks are not only fascists but cowards, they also cancelled their plan press conference when it came to light that protests would erupt.  I’ll give them the benefit of the doubt and just assume that they wanted to spare their overly-sensitive ears from having to hear the voices of people uttering divergent opinions.

However, they are not without allies, and therein lies the problem.  While the pro-music forces are a ragtag and motley crew of political neophytes, the operation of music foes is organized, well-funded, and well-connected.  You can even check out their website bearing the slogan “Hear the Music, Stop the Noise.”  One imagines some Madison Avenue whiz-kid coming up with that one.  “Gee, these people are like some old lady in a tenement who beats her cane on the ceiling whenever she hears anything above a whisper.  How do I shine up this particular piece of fecal matter?” 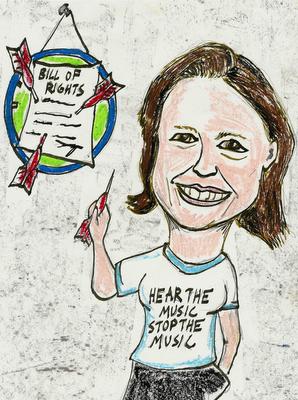 I suppose you don’t really need much shine when you have your councilmember on your side, in this case by Councilwoman Kristen Palmer.  I was recently sent a copy of a draft ordinance entitled the “FQMD [French Quarter Management District] Draft Outdoor Loudspeaker Ordinance.”  I’m not sure of its present status, but it appears to be a bookend to legislation proposed in April of last year by Palmer that included various restrictions on the use of loudspeakers.   The chief stated purpose of the ordinance is “to establish a process for authorizing and permitting outdoor loudspeakers within the French Quarter and a process for resolving complaints related to use of the outdoor loudspeakers, and matters related thereto.”

Although over sixty years of jurisprudence from the U.S. Supreme Court provides that loudspeaker restrictions should include time and decibel restrictions, this draft ordinance simply states that “[t]he commercial enterprise shall contain the sound from the outdoor loudspeaker so the sound remains within its premises.”  That’s it.  Noise actually travels, so if the speakers are outdoors, the sound cannot be “contained.”  Thus, an ordinance that simply provides that noise be contained effectively bans the production of that noise to begin with.  The mere creation of the noise becomes the sum of the offense, which is unconstitutional.

If that weren’t bad enough, the ordinance then incorporates a fairly explicit heckler’s veto.  It provides that all a citizen has to do is make a sworn complaint, with no filing fee required and no procedures or standard of review delineated, to initiate an administrative proceeding against a business using loudspeakers.   Given that virtually any other proceeding I can file against a business requires a significant filing fee and sets forth clear standards, the agenda here is clear – once somebody complains, the business is toast.  The owners might as well just burn the place down for the insurance money and spare themselves the Kafkaesque nightmare that would accompany a meaningful challenge.

Again, I don’t know the status of this draft and cannot vouch for its origins, but if it is legitimate, it does sound like there are forces trying to ban loudspeakers (while not appearing to do so).  This is certainly the type of subterfuge we’ve come to expect from Palmer, who spits out unconstitutional legislation like Don Rickles spits out crude one-liners.  When she isn’t banning protected speech or passing thinly-veiled anti-loitering laws, I’m convinced she plays darts on a board with the bill of rights affixed.  A civil libertarian she is not.

But what’s really galling here is that our current anti-noise laws already either toe the line or step over it.  Back in 2010 the city had the audacity to crack down on, of all things, brass bands on Bourbon Street.  There, it relied on a law that expressly disallowed the use of musical instruments, when obviously the First Amendment does not permit music to be singled out as a means of expression.  Unsurprisingly, the city’s previous loudspeaker ordinance, which banned loudspeakers for the purpose of “attracting the attention of the public to any building, structure or vehicle,” was held unconstitutional.  Nevertheless, the new draft includes similar language.

Accordingly, the entire “stop the noise” movement should really be termed by its real goal, which appears to be “beating a dead horse.”  This is ground we’ve already gone over, and they lost.  They need to get over it and return to the negotiating table.  The present noise ordinance,  a mess of confusing and unconstitutional standards, does need to be revised.  However, it doesn’t need to be strengthened; rather, it merely needs to be clarified and simplified.  This will assist with notice and enforcement, leaving all parties better off.

For now, however, the anti-noise forces are content to overplay their hand and virtually guarantee a return to the status quo following short-term gains, either because their proposed “reforms” are politically untenable or simply unconstitutional.  They think that their money and connections are enough to win.  They’re about to find out, once again, that they are not.

56 thoughts on “Owen Courreges: How to read the new ‘anti-noise’ proposals”