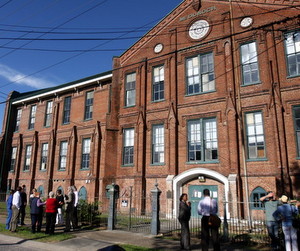 The students of the Crocker Arts and Technology charter school had one of the most harrowing journeys through the post-Katrina education landscape of any school in New Orleans, bouncing around four campuses in the city over five years before the school finally lost its charter this year among stagnant test scores.

Now, finally settled into their long-promised new building on Marengo Street with a new operator preparing for next year, Crocker parents are now faced with yet another worry — enough peeling lead paint has been discovered in the campus where Crocker kids spent the longest part of their odyssey to warrant an emergency remediation before the building can be used again. But with lead poisoning known to affect intelligence levels, the broader question of how many other students are at risk around the city remains unanswered.

Crocker opened on Pratt Drive in Gentilly in August of 2008 and moved the following year to the New Orleans Free School campus on Camp Street. In December 2009, the Recovery School District issued an emergency notice removing children from the school because the foundation had discovered to have deteriorated to a “spongy mass,” and children were yanked out almost over night, their artwork still hanging on the walls years later (the building has since been sold and is slated for redevelopment into apartments).

After a few weeks in temporary modular buildings, the Crocker kids landed at the historic McDonogh 7 school building on Milan Street, where they would spend the next two years while a gleaming new school was built on the original Crocker site on Marengo Street. Their anticipated August 2012 move-in was delayed as construction continued, and shortly thereafter, school officials found out that Crocker charter would not be renewed as test results never earned the school a score above an ‘F,’ and in fact ended slightly lower than it started.

Crocker was scheduled to be taken over by the New Orleans College Prep charter management organization at the beginning of the 2012-13 school year, remaining in the new Marengo Street building with perhaps some hope at long last of stability. The McDonogh 7 building Crocker had just left was scheduled to be given to Audubon Charter School — until the discovery of lead paint peeling inside the building demanded emergency remediation.

Dr. Paul Lo, a certified lead inspector and lead risk assessor with Materials Management Group Inc, said he assessed McDonogh 7 back in January or February at the request of the Orleans Parish School Board, which had received the building back from the Recovery School District. During his investigation, Lo found paint peeling in the hallways, around the windows, and in the classrooms, he said, concentrated primarily on the second floor, and enough that the Orleans Parish School Board decided remediation was necessary before Audubon could move in.

One of the primary effects of lead poisoning is damage to the central nervous system, and it is particularly detrimental to young children whose bodies are still developing, experts say.

“Even low levels of lead in blood have been shown to affect IQ, ability to pay attention, and academic achievement,” according to the Centers for Disease Control. “And effects of lead exposure cannot be corrected.”

To be clear, the mere presence of lead-based paint in a building is not the primary hazard; Lo estimates that 70 percent of homes in some New Orleans neighborhoods probably have it. It is the actual ingestion of lead-based paint by children — either by eating paint chips that have peeled off, or when those chips become part of the dust in the air — that it is harmful.

“I think they key is, you have to maintain it well,” Lo said.

Maintenance, however, is one of the many blind spots in the fractured two-authorizer, many-operator charter system. The condition of the school buildings should be written more strongly into charters, said Kathleen Padian, deputy superintendent for charter schools at the Orleans Parish School Board.

“These are public investments that need to be maintained,” Padian said.

Lo said it would be impossible to tell when the paint began peeling, so whether former Crocker students who spent time in McDonogh 7 were at risk from the building was likewise unclear. But should they be tested? Absolutely, he said.

“I would recommend every young child in New Orleans, particularly in Uptown and Mid-City, to have their blood levels tested,” Lo said.

The New Orleans College Prep charter-management organization is in the process of taking over Crocker, and CEO Ben Kleban said this week’s inquiries were the first he’d heard of the lead issue at those students’ former campus. Even apart from the issues of lead, Crocker’s history of campus hopping is an extreme even among the New Orleans education landscape, Kleban said.

“Moving around that much, I would certainly speculate that was a challenge,” Kleban said. “Younger children benefit from structure and routine, and I can imagine that was difficult.”

(Former Crocker board chair Grisela Jackson requested any questions about the issue be sent to her in writing, and did not return responses afterward.)

Roughly 240 Crocker students are expected to stay on with NOCP next year. To provide them with lead testing would be an unusual move by a school — and it’s unclear what the school’s next steps would be afterward — but Kleban said it is worth considering.

“If that were recommended to us by an expert, we’d certainly look into how to do it,” Kleban said. “I definitely want to do anything we can.”

The condition of all the schools in the city was surveyed four years ago, said Recovery School District spokeswoman Zoey Reed, and lead levels were included in those assessments. Individual records were kept at the school, however, and Reed said she didn’t have immediate access to Crocker’s report. The current RSD staff does not recall any reports of lead poisoning among Crocker students, however.

As New Orleans schools continue swapping campuses, could more peeling lead paint be discovered? How widespread is the risk? No one — not Lo, not the RSD or OPSB officials — was willing to guess how many school buildings might still have walls lined with lead paint.

“Most schools in New Orleans are pretty old,” Lo said.

“There are a lot of different buildings throughout the city that could have lead-based paint,” Reed said.

And neither the RSD nor OPSB has anyone specifically tasked with keeping an eye on those that do.