Our brief trip up to Illinois for a long weekend turned out to be every bit the culinary adventure we’d been seeking, not so much because the food was adventuresome but because it gave us a chance to hit some spots that simply don’t exist in this part of the world – at least not yet. Give it time.

My highlight was, of course, this Midwestern pork loin sandwich. We all got one from this tiny place in Metamora IL, outside Peoria. It’s a slice of pork loin that’s pounded flat, breaded and fried  — essentially a chicken-fried pork loin about nine to ten inches in diameter. The “sandwich” part comes in when the meat is placed in a standard-sized, grocery-store type burger bun and dressed with ketchup, mustard and sliced dill pickle. Of course, the meat is grossly larger than the bun and part of the fun is using your fingers to eat the meat that hangs out. My plate came with both fries AND onion rings, so it was exactly the carb-and-fat fest I was anticipating. Marvelous. 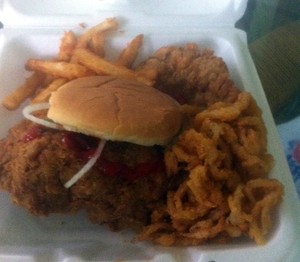 While on the road, we intentionally avoided places like Jack-in-the-Box or Whataburger because we can find them not too far outside New Orleans (Gonzales and Mississippi, respectively). But, as mentioned in last week’s column, we indeed succumbed to the lure of a Waffle House as we neared Memphis. The menu has changed a little over the years, but not appreciably. This has whetted my appetite to possibly be more willing to venture out to New Orleans East or up to Gentilly to frequent those locations a little more.

We overnighted in Cape Girardeau and were delighted to find a Fazoli’s. This Kentucky-based chain has Southern outposts as close as Pensacola, but it’s largely a Midwestern outfit that’s a mash-up of Olive Garden food (with breadsticks!) and Burger King convenience. The menu is broad and well-done enough and the décor is tasteful enough to appeal to adults, but there are plenty of kid options too. It’s also an ideal place for the traveler who’s looking for lighter fare without taking too much time off the road. The appeal to me includes its lack of clowns, crowns and other toddler decor – meaning I can feel like an adult if I stop, but a kid of any age can find pasta, pizza or other familiar fare.

We drove the 16 hours back from Illinois in one day, meaning the only non-gasoline stop was at a Steak and Shake south of Memphis. I hadn’t been to one in nearly a decade and was thrilled to find out the only moderate changes have been for the better. The menu is easily broad enough to stay away from burgers if desired – though the burgers and thin-cut fries are what made the chain into what it is. It also features a series of options for $4.99 or less and they’re more than adequate. The iced teas are large and service is very quick for a sit-down place with actual servers, though you can use a drive-thru window if desired.

Reading back over all this, I know it sounds a bit silly to be offering reviews of common, big-chain roadside places and local junk food favorites. But it’s summertime and vacation for many of us means being in a car with kids all day on unfamiliar roads in unfamiliar territory. Not all of us can get on a plane and spend a week in, say, St. Maarten and, though that might be nice, I can usually find as much strange new culture and as many odd attractions on a drive from here to, oh, Indiana as I would during a week in Italy. All it takes is the right curiosity and attitude. At least there’s no language barrier. Well, usually. Sometimes.

I think it’s vital to get out and be a local wherever you vacation, and that means some chain operations away from the familiar. Another highlight of the trip was a stop at a Schnuck’s – a St. Louis-region grocery outlet. I was only there for some ice and a few other things, but I got to wandering around and thinking the place was essentially Rouse’s moved to the Midwest. It was full of regional specialties, local produce and prepared foods, along with a huge array of regional craft beers and local wines.

If Donny Rouse had a Missouri twang and a thing for flattened pork sandwiches, he’d be thinking, “nicely done.”

3 thoughts on “Craig Giesecke: The pork-loin sandwich and other Midwestern delicacies”