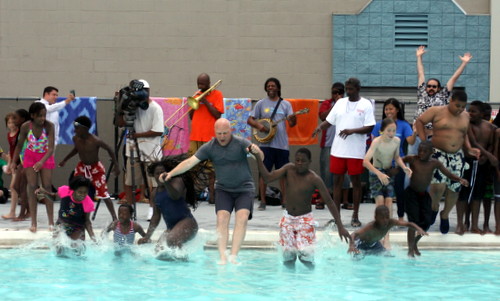 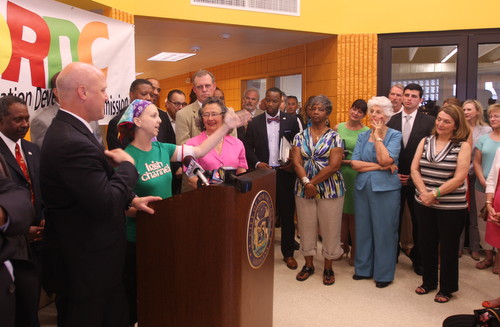 Mayor Mitch Landrieu and the crowds of city and neighborhood officials with him had a nearly perfect soundtrack of every step of their way through the newly reopened Lyons Center in the Irish Channel on Monday morning.

In the lobby, it was the tinkling of an electric piano as ballet dancers rehearsed in a studio behind the news conference podium. In the gym, it was a group of musicians performing the Harlem Globetrotters theme “Sweet Georgia Brown” as Landrieu shot a few baskets. They kept up the music out by the pool, but were hard to hear over the squeals and splashing as the mayor gently dunked some of his youngest constituents.

Even the background chatter was on message, as the kindergarten-aged “Bears” group of day campers lined up in a hallway and gawked at the TV cameras passing by.

The city broke ground on the renovations to the 59-year-old Lyons Center in September, marking seven years it had been closed after Hurricane Katrina. Since then, the graffiti-covered structure with sunlight streaming freely through large holes in its roof has transformed into a gleaming new recreation center where programming for sports and the arts co-exist side by side.

At Monday’s ribbon cutting ceremony, Irish Channel Neighborhood Association president Kara Morgan said that when she was diagnosed with Stage IV melanoma earlier this year, her first thought was the hope that she survived to see the center reopen. It is used not only by Irish Channel residents, she said, but by people from all over Central City and Uptown.

“It’s something that has really been needed in the neighborhood since Katrina,” Morgan says. “I don’t know that basketball is going to stop every shooting, but it doesn’t hurt to give a child something to do.”

Landrieu agreed the center will save children’s lives, giving them skills and leadership experiences to become deeply involved citizens. Further, he said, it is further proof of the city’s rebirth as New Orleans approaches its 300th anniversary in five years.

“You will see a city everyone has always dreamed she could be, and this is a great example of that,” Landrieu said.

With Landrieu at her mercy at the podium, Morgan said the center’s next need is a permanent structure to provide some shade around the pool — a poignant reminder of her advocacy for skin-cancer prevention, coupled with a joke about neighborhood volunteers.

“You know neighborhood associations,” Morgan said. “As soon as you do one thing, we’re asking for another.”

The mayor promised to work with her, lined up everyone to cut the ribbon, then charged out toward the pool. 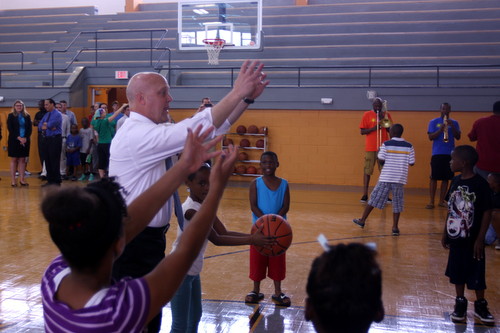 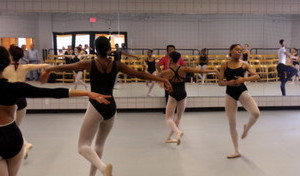 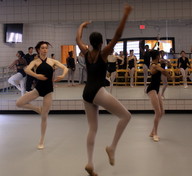 Ballet students rehearse in a studio in the Lyons Center on Monday morning. (Robert Morris, UptownMessenger.com) 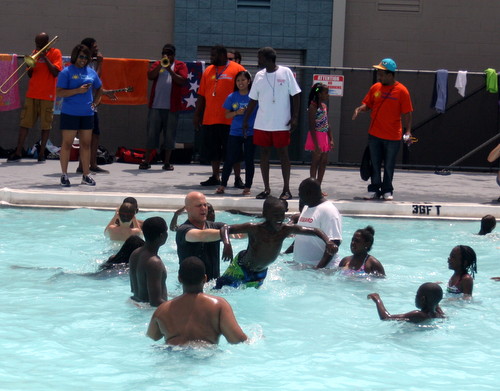 Mayor Landrieu plays in the pool after the reopening ceremony. (Robert Morris, UptownMessenger.com)