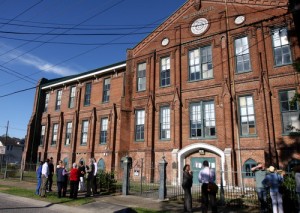 The McDonogh 7 building, photographed in May. (Robert Morris, UptownMessenger.com)

Audubon Charter School families are facing a cruel déjà vu — suddenly having the promise of a new facility snatched away from them because of concerns about lead contamination, but it is a situation that has implications across the city of New Orleans.

For months, the school has been cautiously preparing to move from its decrepit Carrollton Courthouse campus to the McDonogh 7 building on Milan Street, which was vacated last fall when Crocker students moved into their brand-new building on Marengo Street. This week, however, Orleans Parish School Board officials informed Audubon that a project to remove lead paint from the McDonogh 7 building will take longer than expected, past the Aug. 14 start of school, meaning the Audubon kids will have to spend some time at the beginning of the year back in the Carrollton building.

More specifically, lead paint is peeling in the McDonogh 7 building, Orleans Parish School Board deputy superintendent Kathy Padian told the Audubon board on Saturday. When the OPSB sought a quote for the price of removing the paint and repainting the building, it came in above $300,000, a figure that will require a 28-day open-bid period according to state law. Further, the length of time was estimated to be 10 weeks, so even under the best imaginable circumstances — if the project could begin immediately, if a different contractor only took eight weeks and if no other problems were discovered — the school still could not be moved in on time.

The OPSB did not anticipate such problems, Padian said, because the Recovery School District had Crocker children in McDonogh 7 less than a year ago — though she said she did not know if the paint was already peeling when those children were there. Now, the OPSB has already taken soil samples from the grassy play area to determine if the soil is contaminated with lead as well.

The issue is crucial because lead poisoning can permanently affect intelligence, and children are more susceptible to it because they come into more direct contact with the soil or paint that contains lead. It is also a sore subject for Audubon families: In 2011, in anticipation of renovations to the Broadway campus, the school was offered a temporary campus site that turned out to have lead levels that were the highest one researcher said he had ever seen, though he also said it could be contained. The state ultimately intervened to stop the move, and the move out of the Broadway campus did not take place until the beginning of 2012.

Audubon parents had approached the proposed move to McDonogh 7 skeptically, asking ever since its announcement for assurance that it would actually be ready by the start of school — and not a repeat of the rocky move out of Broadway. Thus, this week’s news created a “sense of betrayal,” said Audubon principal Janice Dupuy, as teachers learn they will have to unpack their classrooms once again.

Cornelius Tilton, chair of the Audubon governing board, noted that because of the seriousness of the issues involved, the slower, more-thorough evaluations are the more prudent course.

Padian said she hopes to have a firm date that McDonogh 7 will be ready for Audubon by next week, and that school leaders can then plan when is best to move in, such as during a fall break or over Thanksgiving holidays. In the meantime, because students and teachers will have to return to the leaky Carrollton courthouse and outbuildings, work will also begin next week on waterproofing the buildings over the summer.

Children and teachers at Carrollton also suffer from respiratory problems they believe are tied to mold or other air quality issues, parents and administrators said at the meeting. If they have to return, they asked if Carrollton could receive emergency remediation for those issues — board member Shawn Barney wondered aloud if the school or the school board is facing possible litigation for exposing children to those issues.

Parents asked about a number of ways to expedite the process for either moving into McDonogh 7 or repairing Carrollton, such as an emergency waiver of public bid law similar to that recently received by Sophie B. Wright Charter School for termite damage. The Audubon issues are on the agenda for a Tuesday-evening meeting of the Orleans Parish School Board, Audubon officials noted, and they encouraged parents to attend and ask the OPSB for more assistance.

There may be one silver lining for Audubon. As the school prepares to place modular buildings at the McDonogh 7 site, the city has requested a new survey of the property, Padian says. That has also been completed, and there is some hope that the more up-to-date measurements will show no variance from city codes is needed for the modulars, which would eliminate another source of potential delay.