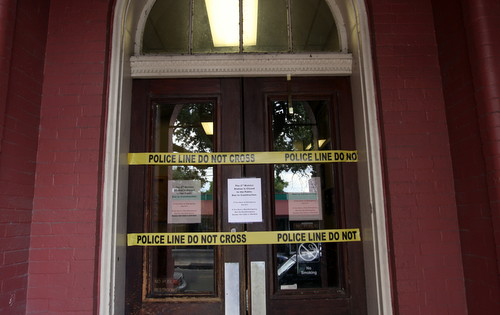 Police tape notifies the public that the Second District station was closed Saturday while workers made emergency repairs to the floor in the lobby. The station has since reopened. (Robert Morris, UptownMesenger.com)

Private donations and emergency repairs continue extending the lengthy career of the New Orleans Police station at the corner of Magazine and Napoleon bit by bit, but the 110-year-old building may finally be in line to retire from service in the next few years.

Money is already being allocated to replace the crumbling structure, city officials said Wednesday, but before the project can move much further, a decision must first be made on where the new Second District station will be. 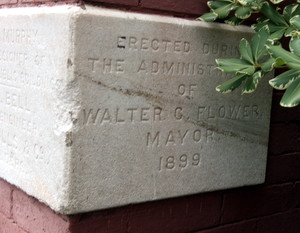 An inscription on the NOPD Second District station reads that it was built in 1899. (Robert Morris, UptownMessenger.com)

Age has not been kind to the Second District station in its latter years. A citizens’ support group, COPS II, has provided money for extensive repairs, as has attorney Morris Bart. The structure is notoriously termite-ridden, and during hurricanes, a lone officer is left to monitor the building’s condition while the rest of the force shelters at more secure locations, such as Children’s Hospital.

Most recently, the station had to be closed to the public for several days over this past weekend for emergency repairs to the floor. Officers noticed that soft spots in the floor had begun sagging, and when city workers arrived to inspect the problem, they found such extensive deterioration that much of the floor had to be replaced.

“There’s a desperate need to get this project underway,” NOPD facilities supervisor John Faust said of replacing the building during a public hearing Wednesday morning on the NOPD’s requests for the city’s capital-improvement budget.

Although there have been numerous plans to replace the building since Hurricane Katrina, city officials currently envision a three-year process. In the current budget, $400,000 has already been allocated to purchase property somewhere Uptown for a new station. In 2014, the plan calls for $550,000 to be allocated for design, and in 2015, the plan designates nearly $5 million for the building’s construction. 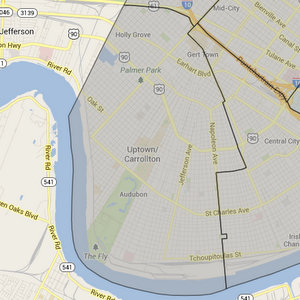 The NOPD Second District. The current station sits on the block that appears as a notch in the line along Napoleon Avenue dividing. (via nola.gov)

Where to place the building remains undetermined, however, and two options were discussed Tuesday morning. If the goal is to locate the building centrally in the Second District — which runs from near Napoleon and Tchoupitoulas up to Hollygrove — a site near the Ochsner Baptist campus in the Freret neighborhood might be ideal, especially if there is other publicly-owned land in the area, said Jim Lynch of the city’s capital-projects department. However, NOPD officials have also expressed interest in a location closer to Pine and Earhart in the Gert Town-Hollygrove area that may have more space for officers to park, Lynch said at Tuesday’s meeting.

Almost any site will be more accessible for Second District officers than their current location at the district’s far corner. After district lines were redrawn in early 2012, the Sixth District’s jurisdiction was extended to Napoleon Avenue, but had to carve out the block the Second District station sits on.

The design for the building is likely to be similar to new stations in the Fifth and Seventh districts, Faust said. The Seventh District station cost $6.2 million and opened in February 2012; city officials broke ground on the $7.2 million Fifth District station at 3900 North Claiborne Avenue in August 2012.

“The building is very functional,” Faust said of the recently-used design. “Why mess with something that works well?”

The new station can likely receive a facade that matches the surrounding neighborhood, Faust noted. But the design questions are largely premature, city officials agreed, until a suitable location is found first.