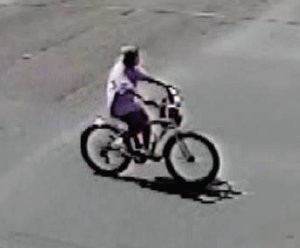 Police have obtained a surveillance image of a man who robbed a bakery on O.C. Haley Boulevard last month, and are seeking the public’s help identifying him.

A man entered Adrian’s Bakery at 2016 O.C. Haley Boulevard around 3 p.m. April 13 and demanded money from the cash register, implying that he had a weapon, according to a police report. After the cashier gave him the money, he left on a bicycle, the report states.

The suspect is described as a 5-foot-5, 160-pound black man between 30 and 40 years old, police say. Anyone who recognizes him is asked to call Detective Ed Johnson of the NOPD Sixth District at 658-6060. to leave an anonymous tip that may be eligible for a cash reward, call CrimeStoppers at 822-1111.