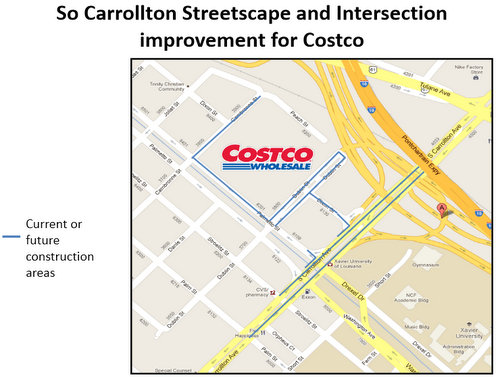 (Map via city of New Orleans)

The far-right lanes of both sides of South Carrollton Avenue around the new Costco warehouse will close this week as the city begins a streetscape project around the site, officials announced.

The $5.5 million project will add a left-turn lane onto Palmetto Street, install a new traffic light at Dublin and Dixon streets, repave the road and replace the sidewalks, city officials said in a news release today.

In addition to the lane closures on South Carrollton, portions of Dublin, Dixon, Palmetto and Cambronne streets will also be closed at various points for drainage and transportation improvements, the release states. A groundbreaking ceremony for the project will be held at 3 p.m. Friday at the site.

For details, see the full release from the city below:

A groundbreaking ceremony to commemorate the beginning of construction on the streetscape project is scheduled for Friday, May 31 at 3:00 p.m.

“The City of New Orleans is committed to improving the drainage, traffic flow, and pedestrian accessibility around the new Costco Louisiana Warehouse.” Mayor Mitch Landrieu said. “These public infrastructure improvements are an example of targeting our limited resources to investments that will create new jobs, generate new tax revenue, improve retail options in the city, and facilitate redevelopment of a previously vacant property.”

The first phase of the streetscape project’s construction will include closure of both the northbound and southbound, far right travel lanes on South Carrollton Avenue. Traffic cones, barricades and safety signage are currently on site.

Later in the construction sequencing, traffic will be shifted to allow for resurfacing of the center and far left travel lanes. Traffic impacts will continue through the summer.

Additional traffic adjustments required as part of the Costco construction include:

Citizens should exercise caution when driving, bicycling or walking near active construction sites.

Costco is building a brand new, 148,000 square foot warehouse at the 14.7-acre site formerly occupied by the Carrollton Shopping Center. The project will create approximately 200 full and part-time jobs, utilize 120 prevailing-wage local construction positions, and result in a capital investment of over $40 million. The warehouse is expected to open this summer.