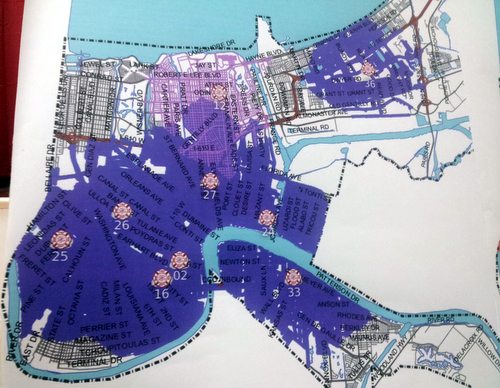 Purple areas show those that a ladder truck can reach within the national standard of eight minutes under a New Orleans Fire Department redeployment plan set to take place this summer. (Robert Morris, UptownMessenger.com)

Despite official assurances that the removal of a ladder-equipped fire truck from the station on Arabella is part of the best possible future for the New Orleans Fire Department, Uptown residents who live nearby continue to worry that their level of fire protection is being reduced.

As part of a general redeployment of firefighters around the city, the ladder truck at Arabella will be taken out of service around the end of June, fire officials have said. A pumper truck — which actually delivers water, and is considered the most important to have on scene at any fire — will remain active at the Arabella station, and the rare fire calls that require a ladder will still be sent one from either the station at Carrollton and Claiborne or the station on Martin Luther King Boulevard.

“Companies are still coming,” said Assistant Superintendent Tim McConnell of the ladder trucks. “It’s just going to take them a little bit longer to get here.”

This plan, however, puts a sliver of Uptown that runs generally between Magazine Street and the river, from Napoleon Avenue to Audubon Park, outside the recommended eight-minute travel time for a ladder truck. Some worried about the safety of major structures like Children’s Hospital, though McConnell said hospitals are generally some of the best protected buildings in a city. Others said they didn’t feel the plan adequately accounted for the density of the population in that corridor, though McConnell said the location of the ladder trucks is based on the highest number of calls that require them.

Other residents said they were frustrated that the fire department did not include their input at an earlier point, in case they could have helped come up with other alternatives.

McConnell apologized for not including the residents sooner, but City Councilwoman Susan Guidry pointed out that some areas of the city are much farther away from a ladder truck, particularly Lakeview and New Orleans East. What is important now, Guidry said, is finding ways to mitigate the change, promising to explore suggestions from residents such as restoring a program that gave emergency vehicles green lights at intersections or granting them access through potentially faster routes through the port.