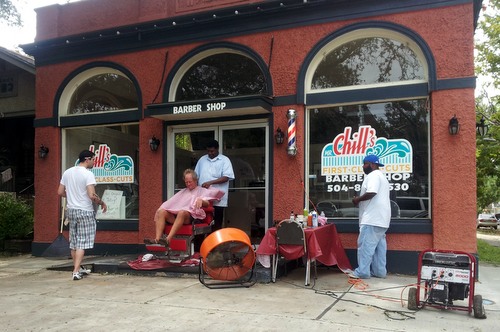 Wilbert Wilson (center) cuts hair in front of at Mr. Chill’s First Class Cuts on South Carrollton on Aug. 31, 2012, following Hurricane Isaac. His setup with a generator-powered fan and clippers is similar to what he used in a gas station parking lot after Hurricane Katrina. (Robert Morris, UptownMessenger.com) 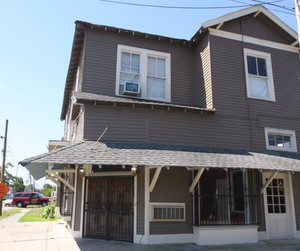 The shop at the corner of General Pershing and South Derbigny streets where Mr. Chill’s Broadmoor Dogs and Sweet Pastries will open next month. (Robert Morris, UptownMessenger.com)

The opening of Mr. Chill’s First Class Cuts barber shop on South Carrollton Avenue following Hurricane Katrina was hailed as one of many signs of the New Orleans’ rebirth. Now, Mr. Chill is expanding back home to Broadmoor to open a hot dog and pastry shop in his old corner store in what should possibly be seen as evidence of the city’s further growth.

Wilbert Wilson’s first barber shop was at the corner of South Derbigny and General Pershing streets in Broadmoor for two years, but the 10 feet of floodwater from the levee failures after Katrina forced him to relocate his business temporarily to a picnic tent with a generator in an abandoned Shell station parking lot. In 2007, he opened Mr. Chill’s First Class Cuts on South Carrollton, deemed by a NPR correspondent at the time as “a bright light in a city where every reopened business is a small victory against despair.” Since then, the shop has hosted LEAP test tutoring programs and even cultural events such as teaching young boys how to tie a tie.

Last week, Wilson obtained enthusiastic City Council approval to open “Mr. Chill’s Broadmoor Dogs and Sweet Pastries” back inside his original location in his old neighborhood. He said the shop will have both hot dogs and baked goods like cupcakes, cookies and even cakes for special occasions, and that he’ll split his own time between the two locations after it opens next month.

One unique aspect of the store, he said, will be its location within the neighborhood instead of on a commercial corridor, giving it both a nostalgic feel and returning to a more traditional business model. 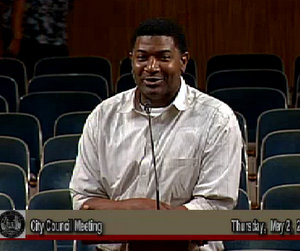 Wilbert “Mr. Chill” Wilson speaks to the City Council in early May. (via nolacitycouncil.com)

In his appearance before the City Council, Wilson was praised and encouraged by council members Jackie Clarkson, Stacy Head, Susan Guidry and especially LaToya Cantrell, who called him a “pillar of the community.” She noted that the neighborhood association is strongly in favor of the shop.

Wilson said the support of the neighborhood has been crucial to him — so much so that ‘Broadmoor’ is part of the shop’s name.