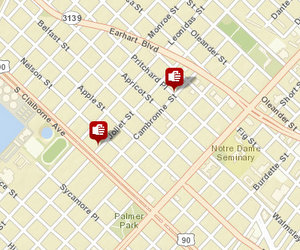 A man was shot Saturday evening on Cambronne Street near Earhart Boulevard, and another man was stabbed earlier in the day in a domestic disturbance on nearby Joliet, according to initial police reports.

The shooting was reported shortly after 9 p.m. in the 2900 block of Cambronne (close to Pritchard Place, about two blocks on the river side of Earhart Boulevard), according to police records. The male victim was found suffering from several gunshot wounds, the report states, but no further details regarding his condition or the circumstances of the shooting were listed.

Earlier in the day, about 3 p.m., a man was stabbed in the hand in the 2400 block of Joliet Street (just off South Claiborne Avenue), the reports show. The victim was stabbed by his girlfriend after an argument, the report states, but no other details are listed.