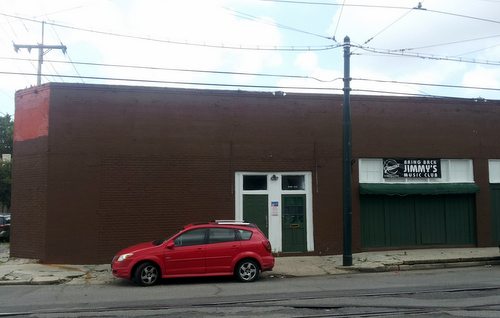 The old signs for the Frat House at 8200 Willow Street have been replaced by a banner for Jimmy’s Music Club. (Robert Morris, UptownMessenger.com)

When the New Orleans Alcoholic Beverage Control Board rejected a request by Jimmy’s Music Club last week, it may have seemed like the hand of The Man slapping down the former punk rock haven once again.

The reality, however, is that attorneys, city officials and even the club’s neighbors agree that Jimmy’s may be closer to reopening than it has in the last year.

Technically, club owner Jimmy Anselmo and his partners in Lucky Tab LLC were requesting on May 21 to appeal the denial of their application for a liquor license last year. Their argument — an unusual one — was that when liquor license applications are denied, they must be appealed to the city’s independent Alcohol Control Board. And because the basis for that denial was a moratorium preventing any new businesses from selling alcohol in the Carrollton area without permission of the New Orleans City Council, Anselmo was essentially asking the board to declare the City Council’s moratorium illegal.

The board — made of council appointees — was, unsurprisingly, having none of it. For months, commissioners have said for months that Jimmy’s had two options — appeal the moratorium to the council like other new Carrollton businesses have done, or file a lawsuit against the moratorium in Civil District Court.

“This board does not have the power to say that something the City Council did is illegal or unconstitutional,” said board member Jerry Speir, a Carrollton resident appointed by District A Councilwoman Susan Guidry. Keeping the Jimmy’s item before the alcohol board simply confuses the public, Speir said: “There is nothing to be gained in my opinion from keeping this on our docket.”

With that, the board members voted Jimmy’s off the docket and out of the room, without so much as a comment from Anselmo himself or the dozen or so supporters he brought with him. 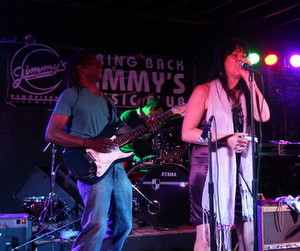 Paula and the Pontiacs perform at a benefit to help reopen Jimmy’s Music Club on April 4, 2013. (Robert Morris, UptownMessenger.com)

This time around, however, something was different. Prior to the hearing Anselmo, his partners and attorney Michael Tifft had spent about an hour outside the council chambers in private conference with city attorneys. Tifft said they were advising the Jimmy’s team to pursue a traditional appeal of the alcohol moratorium through the City Planning Commission and City Council.

“That was the first real breakthrough we got from City Hall,” Tifft said afterward. “I see it as a risky process, but they did indicate that the mayor’s office is committed to seeing us through the process.”

Another tentative “breakthrough” has been with the Carrollton Riverbend Neighborhood Association (CRNA). Anselmo met personally with association members in February and several of its leaders reminisced about their own days at the original Jimmy’s Music Club. Their main concern is that Jimmy’s does not become a repeat of the Frat House bar; Anselmo leased the space to that club for about five years until it closed in 2012 following neighborhood complaints and charges of underage drinking.

“CRNA and the neighbors support Jimmy’s reopening — if it’s done right,” said Jill Stephens, an association member leading nearby residents in discussions with Jimmy’s about a good-neighbor agreement. “We just want the problems that existed at the Frat House to never happen again. Since the property is owned by the same person, we have no comfort that they wouldn’t happen again. The memory of that is still fresh.”

The negotiations thus far have centered on Jimmy’s responsibility for outside litter, noise from the bands and patrons’ conduct outside the bar. But one sticking point has emerged — whether to allow customers younger than 21 inside the bar to hear music. In order to book bands that draw an audience from the nearby universities, Jimmy’s needs to be able to admit customers age 18 and older, Tifft said. He said he met his future wife outside the original Jimmy’s — he was 18, she was 17 and she was left standing outside because she was too young to go in.

Neighbors say those youngest patrons tend to cause the most problems, however, so restricting the bar to people of legal drinking age will help the neighborhood get behind the club. (It’s unclear if the club could open as an all-ages venue, but Tifft says Anselmo doesn’t want to, anyway.)

“If we can close that gap, we’ll be very close to a solution,” Stephens said.

If Jimmy’s pursues an appeal, the City Planning Commission will weigh it first, and then it will go to the City Council. Guidry — the target of Jimmy’s supporters’ ire since proposing the moratorium — declined to say what she would do at that point, but signaled that the neighborhood’s support would be crucial. “If a developer or a business owner can work things out with the neighborhood, including the near neighbors, that always creates a more positive path to whatever the business is requesting,” Guidry said.

The City Council already has a pending ordinance, proposed by Council President Jackie Clarkson, to make all bars in the city 21-and-up — a proposal that has been docked in the criminal justice committee for months. Guidry said she actually doesn’t favor the blanket approach in Clarkson’s ordinance, but that individual circumstances must be considered — as in the case of Jimmy’s.

“Of course that’s something we’ll be looking at carefully,” Guidry said. “This same owner allowed a nuisance bar to operate at that location that these neighbors had to deal with from 2007 to 2012. A lot of the problem was underage drinking.”

If the City Council route ultimately fails, Jimmy’s still has one other option: sue over the legality of the moratorium. And that path was served by the alcohol board’s rejection, Tifft said — based on city code, the alcohol board had to rule before he could turn to the courts.

This article was first published in Gambit through our news-reporting partnership.