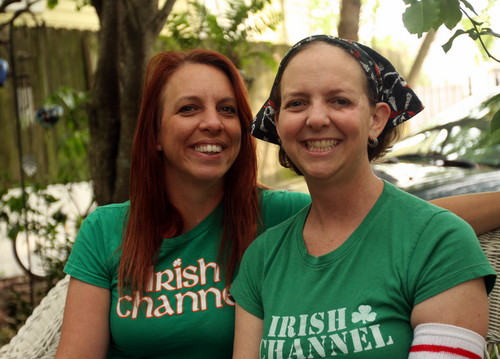 For years, Kara Morgan has given her neighbors her time, love and energy as the tough, cheerful leader of the Irish Channel Neighborhood Association.

Now that the 39-year-old mother of two has been diagnosed with a deadly form of cancer, the Irish Channel is giving back to Morgan this weekend in the neighborhood’s own irreverent way — with a fundraiser for her medical treatment at a brewery, complete with burlesque dancers, musicians, and all the fierce, unyielding optimism that she and her community bear so proudly.

‘Engaged in the community’
Morgan was born in Shreveport but grew up in New Orleans, a member of one of the last graduating classes from the all-girls Mercy Academy in 1991. She earned two master’s degrees — one in statistics and one in public administration — and was working in Seattle when Hurricane Katrina hit the city. She had always wanted to come home, she said, and the catastrophe convinced her to do it as soon as possible, so by the following May she had relocated her work and her young family (Trey Bornmann and their now two sons, ages 8 and 11) to the Irish Channel.

Working from home as a data analyst for IBM, Morgan had the flexibility in her schedule to focus on her other interest, civic activism, and she began volunteering with the Irish Channel Neighborhood Association. The most important task facing the association at the time, she said, was finding something for the many children in the neighborhood to do when they were out of school, but the New Orleans Recreation Department had not resumed any programming. 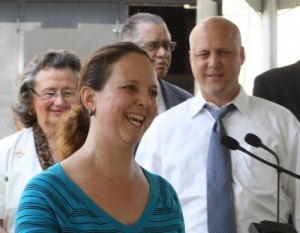 Flanked by Mayor Mitch Landrieu and other city officials, Kara Morgan laughs happily during the the groundbreaking ceremony for the Lyons Center on Tchoupitoulas Street in September 2012. (UptownMessenger.com file photo by Robert Morris)

With financial contributions from some neighbors and coaching time donated by others, the association formed the Lyons Burke booster club and started a summer basketball league with two teams. The games became a rallying point for neighbors, and the championship game at the end of the summer (with a scoreboard operated off of an extension cord from a nearby home) drew nearly 100 spectators — only to end in a dramatic tie.

After that summer, city officials saw the explosion of interest in sports in the Irish Channel, and the neighborhood has filled out teams for football, basketball track and baseball. Now, Morgan and the rest of the Channel are eagerly cheering on the renovations to the Lyons Center, which is slated to reopen this year.

“This is really one of the things that makes me the happiest. It’s just all around-good for the neighborhood,” Morgan said of the flourishing recreation opportunities. “We really want to be engaged in the community. We’d rather engage kids in the neighborhood before a crime happens, rather than just addressing crime after the fact.”

Through her focus on recreation, Morgan plays a role in keeping the neighborhood close knit, said Ed McGinnis, who was the association president prior to Morgan. Neighbors spend time outside, they meet each other at events, and they get to know each other’s children, McGinnis said.

“We realized that, as an association you can’t just put more police on the street,” McGinnis said. “The way that we can impact the kids and crime in our neighborhood is through recreation. … Kara is keenly aware of the key things that make the community — the kids and the education.”

Further, the Irish Channel Neighborhood Association has been supportive to nearby business owners, said Kirk Coco, president of NOLA Brewing, which will host the benefit for Morgan this weekend. Opening what is essentially an industrial brewing operation in a historic area was no easy feat, but Coco credited Morgan and the neighborhood association with helping convince city officials.

‘In perspective’
Morgan became president of the association in 2010. That same year, she had her first bout with cancer, when a suspicious-looking freckle on her cheekbone was discovered to be melanoma. It was considered Stage I at the time, meaning it was confined to that area, and the surgery to remove it was considered a success.

In the fall of 2012, however, Morgan began suffering from heartburn, then abdominal pain, that was first thought to be gall stones. An ultrasound in January revealed a tumor in her abdomen and another in her lung, and the biopsy would confirm them both to be the melanoma, now back in its aggressive, deadly Stage IV form.

Morgan found out on Muses Thursday of Carnival weekend.

“I got the results, and I went to parades,” Morgan said.

That reaction was typical of Morgan’s buoyant outlook, which has been largely unscathed by the life-threatening challenge she faces. In fact, she says, the uncertainty surrounding her first bout with melanoma more frightening. This time, despite her difficult path, she said the necessity of moving forward with confidence has in itself sustained her.

“Overall, most people die from it. There’s no getting around that. But there are a lot of people out there who are Stage IV survivors,” Morgan said. “We’re dealing with everything just one day at a time. I was in a really good mental place when this happened, really at peace, content, living in the moment. Obviously if you go into it from a good place, it helps you mentally deal with it.”

Dealing with it for Morgan means a biochemotherapy treatment at M.D. Anderson in Houston, where toxic chemotherapy drugs attack the cancer, combined with other drugs to stimulate the immune system to help. For each round of treatment, Morgan must travel to Houston and spend a week in the hospital being administered the drugs, which take such a toll on her body that she must then spend the following week in bed recovering. After that second week, however, Morgan has been able to spring back to full speed each time, working, taking care of her children and continuing her volunteer work.

The good news is that, after only the first two of the six rounds of treatment, Morgan’s tumors are already starting to shrink.

“What most oncologists will say is ‘Go home and die’ with stage IV melanoma,” Morgan said. “The fact that I’ve already shown response to the treatment is incredible news.”

On the other hand, the treatment is not considered particularly durable. At some point, the tumors will probably return. Morgan said her doctors view her treatment more as that for a chronic disease — if the biochemotherapy can keep the tumors at bay for another 10 years or so, there may be an even better approach at that point.

“In all honesty, even if it goes away this time, it will probably come back,” Morgan said. “It’s just something that’s going to have to be dealt with probably for the rest of my life.”

Even the worst prospects, Morgan is able to approach with calm. Shortly after her diagnosis, she was at home, one afternoon, meditating on the state of her body, she said. Suddenly a round of gunfire was heard just outside, marking the shooting death of 18-year-old Nolan Alofipo.

‘Near and dear to our heart’
Morgan has health insurance, but the expensive treatment has high out-of-pocket medical costs, and the trips to Houston alone cost hundreds of dollars each. And after the treatment is over, the ongoing costs are expected to remain a burden for her and Bornmann.

With that in mind, Morgan’s family and friends began brainstorming ways to help her, and ultimately came up with the “Throwing Shade on Skin Cancer” benefit that will be held this Friday at 6 p.m. Morgan’s sister, Kristine Rizzuto, began contacting friends in the music industry, and she said she was “floored” by how quickly people volunteered to perform and help. The lineup for the night now includes Paul Sanchez, Ingrid Lucia, Margie Perez, Craig Klein, Bert Cotton, Marc Stone, Soul Apostle, Chris Boone with Sol Fiya and burlesque by the Freaksheaux To Geaux troupe.

In addition to the entertainment, drinks are included in the ticket price, and there will be a silent auction, raffle and food trucks.

“She’s been so involved in so many nonprofit organizations that we were able to pull together a quality team fairly quickly, and it pretty much came together of its own will,” Rizzuto said.

Coco, president of NOLA Brewing, said he was eager to help Morgan.

“This is someone who’s pretty near and dear to our heart,” Coco said. “The beauty of the Irish Channel is that everyone knows everyone. It’s a very tight community.”

As Morgan’s treatment continues, McGinnis said it is amazing to see her continue devoting so much energy to working on the neighborhood’s issues. It also makes it natural, he said, for the neighborhood to now work to bring together a benefit on her behalf.

“Here’s a lady that’s got a couple of sons, trying to help the folks in the neighborhood,” McGinnis said. “It came out of a natural desire to give back to her. Something had to be done for Kara because she’s done so much for others.” 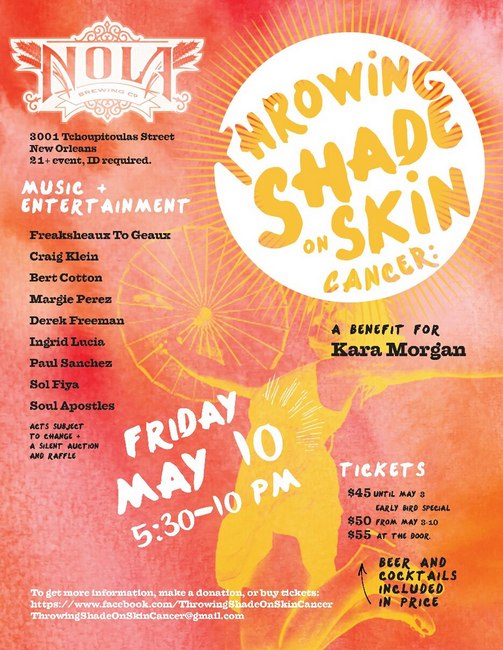