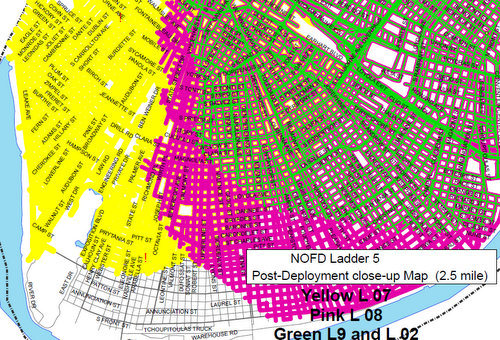 Removal of a ladder truck from the fire station on Arabella Street will reduce the safety of the surrounding Uptown neighborhood and represents a dangerous trend of reducing the size of the New Orleans Fire Department, the president of the firefighters’ union said Thursday night in the latest round of debate over the issue.

City officials countered that the entire neighborhood will still be protected by the most important firefighting equipment — a pumper truck — and that the redeployment set to go into effect later this summer represents the best use of the city’s resources. But residents remained unconvinced, and are continuing their effort to keep the ladder truck in service.

NOFD Assistant Chief Tim McConnell — now in at least his third public meeting with Uptown residents who live around the Arabella station — reiterated that the Arabella station will not be closing, and that the pumper truck will remain on duty and staffed there. National standards require a pumper truck to be able to reach any property in four minutes with four firefighters on board, and the new plan will continue to meet that goal, McConnell said.

Those same standards require a ladder truck to be able to reach all areas within eight minutes, however. After Ladder 5 is taken out of service, the two closest ladder trucks will be at Carrollton and Claiborne and on Martin Luther King Boulevard, and there is a sliver of the riverside neighborhoods between Napoleon Avenue and Audubon Park that will be too far for them to reach in eight minutes. In reality, McConnell said, it will take a ladder truck nine or 10 minutes to reach those areas.

“We’re not talking about going to a 15-minute response here,” McConnell said.

Further, McConnell showed data that demonstrated that the ladder truck is among the least used in the city, and that it spends a minimal number of hours working actual fires once it is called out. And even among those, he said, many times it is simply there carrying additional firefighters to the scene — the ladder itself on the truck is only deployed in worst-case situations, such as when firefighters cannot save a structure and are only trying to contain it.

Nick Felton, president of the firefighters’ union, praised the data that McConnell used to make the decision, but said it only represents perfect conditions. In reality, if there is a big fire in Algiers, for example, all the fire companies around the city shift their positions to cover for those assisting in the blaze.

“Big holes open up,” in the coverage, Felton said.

It is not uncommon then, Felton said, for another call to come out where a secondary unit like the ladder truck is the closest.

“Those are the types of instances when you’re really glad you’ve got it there,” Felton said.

Susan Krantz, a UNO professor who lives in the area and has spearheaded efforts to save the Arabella ladder, argued that the reason for the redeployment is simply budget cuts. Although McConnell showed that the general fund contributions to the fire department are growing, Krantz pointed to the general reduction in full-time employees, and said the truck could be kept in service with a budget amendment.

Ultimately, the disagreement between city officials and those arguing to save the truck showed an emphasis on two different scenarios. McConnell’s data sought to highlight that under normal conditions that exist most days, the neighborhood will still have the same level of coverage. Residents, however, worried that in a worst-case scenario, they are exposed to more risk.

“The priamry team designated by the New Orleans Fire Department is not showing up at the same time as they used to show up,” Krantz said.

The only way to counter the trend of fewer firefighters, Felton said, is to urge the City Council to draft an ordinance allocating $1.5 million into the fire department budget for a new recruit class. They would come online in about 18 months, Felton said, but would help staunch the attrition in the department.

Thursday evening’s discussion, hosted by the Hurstville neighborhood association, drew about 40 people, including an increased number of public officials. Representatives from the offices of both City Councilwomen Susan Guidry and LaToya Cantrell attended, as did state Rep. Neil Abramson and Deputy Mayor Emily Arata. As the Hurstville residents asked repeatedly what they needed to do to keep the ladder in service, Arata and McConnell promised to continue considering their viewpoint.

“I think it’s crystal clear where the neighborhood stands on this,” Arata said.