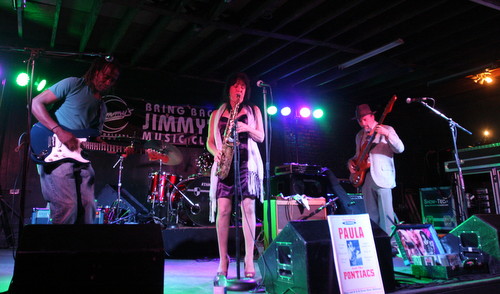 Paula and the Pontiacs perform at a benefit to help reopen Jimmy’s Music Club on April 4, 2013. (Robert Morris, UptownMessenger.com)

Just when New Orleans officials and the owners of Jimmy’s Music Club were beginning to find some common ground, the city’s independent alcohol board on Tuesday afternoon surprised both of them by rejecting Jimmy’s appeal, essentially offering the club two routes: City Council or the courts.

After club owner Jimmy Anselmo closed down the troubled Frat House at 8200 Willow Street last year, he sought to reopen the storied Jimmy’s Music Club in the location under a new liquor license. When his application was denied — because of a moratorium on new liquor licenses in the area — Anselmo decided to appeal his case to the city Alcohol Beverage Control board, arguing that the city couldn’t deny his license application because the moratorium itself was illegal.

The hearing on that argument has been postponed since February, and on Tuesday afternoon it appeared on the board’s agenda again. Before the meeting convened, however, Anselmo, his attorney and his business partners were summoned out of the council chambers by several city attorneys, and the meeting pressed on with other agenda items.

When Anselmo returned about an hour later, his attorney Michael Tifft asked the alcohol board to postpone the hearing another 30 days. Assistant City Attorney Dan McNamara joined in the request, describing the discussions with Jimmy’s as productive.

“For the first time in this case, all parties are communicating better than they have since its inception,” McNamara said.

Board member Jerry Speir, who represents the Carrollton area, objected. The Jimmy’s liquor license was rejected because of the alcohol moratorium, he said, and the normal process for that is to appeal to the City Council — as many businesses in the Carrollton area have done.

“What the sensitivity is that Jimmy’s should have some other process baffles me,” Speir said.

And if Jimmy’s objects to the City Council’s moratorium, Speir said, that’s an argument that should be made in civil court.

Tifft reiterated his argument that the alcohol board was the proper place for Jimmy’s appeal, and noted that the nightclub operators had had a “breakthrough” with the Carrollton Riverbend Neighborhood Association (which Speir is a member of). McNamara also acknowledged Speir’s concerns about hearing the issue in the proper legal venue, but said the additional 30 days would help the city and Jimmy’s come to some agreement about what that venue should be.

The board, however, was not persuaded by either the city’s or Jimmy’s protests, and all five members voted to deny the 30-day postponement and then deny the appeal itself. The dozen or so supporters of Jimmy’s left the council chamber without speaking, and Tifft said he had no comment on the hearing before leading Anselmo and his partners back into City Hall’s offices.