A street gang known as the 110’ers — an umbrella organization of smaller neighborhood groups in the 10th and 11th wards — is responsible for 10 murders, authorities say, and 15 members of it have been charged in a 51-count indictment hailed Thursday as the “most sweeping street gang indictment” in the city’s history.

Among the homicides covered in the indictment is the May 29 shooting of 5-year-old Brianna Allen at a Central City birthday party last year. The investigation into the 110’ers gang began that summer, and “blossomed following the formation of the Multi-Agency Gang unit in November of last year,” according to a statement from the district attorney’s office.

The new Multi-Agency Gang Unit includes investigators and prosecutors from the city, state and federal levels. District Attorney Leon Cannizzaro Jr. hailed it as ushering in a new era of warfare against New Orleans street gangs.

“The old street paradigm of safety in numbers is over,” Cannizzaro said. “We are coming after you.”

Ten of the 15 people charged were already in custody, said NOPD Superintendent Ronal Serpas. Early Thursday morning, police conducted searches for the remaining five, and captured three of them, Serpas said. Photos of the remaining two will be distributed to the public soon to aid in their apprehension as well, he said.

The case will be more difficult to prosecute in court, Cannizzaro said, but will also give jurors a broader view of the defendants’ criminal conduct. 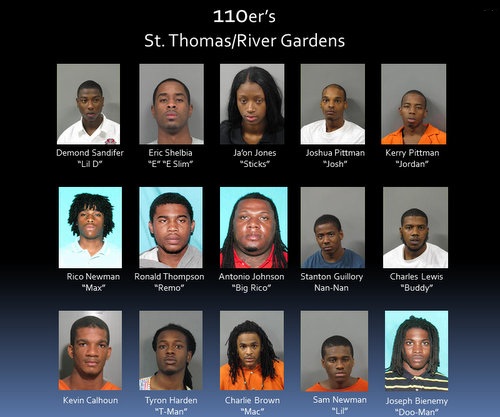 [This article is still being updated. Please check back with UptownMessenger.com shortly for more details.]