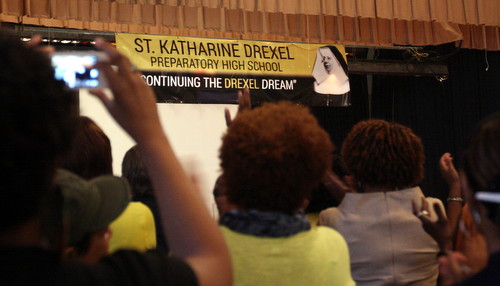 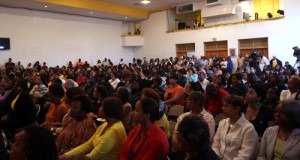 Students, parents, alumni and supporters pack the auditorium at Xavier Prep for a meeting about the school’s future. (Robert Morris, UptownMessenger.com)

Nearly a century after its founding, Xavier University Prep will be reborn this fall with the name of its founder as St. Katharine Drexel Preparatory High School, a group of alumni who have agreed to purchase the building announced to a cheering auditorium Monday evening.

The school will remain an all-girls campus, the alumni said. It will no longer be operated by the Sisters of the Blessed Sacrament, but will be operated by its own governing board in association with the archdiocese, which has supported the effort from the beginning.

Despite the name change, the school will maintain the yellow-white-and-black color scheme and the “Yellow Jacket” mascot so well known in New Orleans. 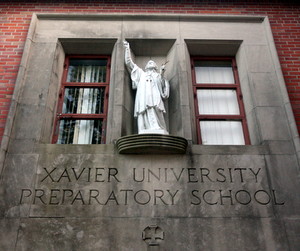 Nearly every comment made by the speakers Monday night was met with cheers and standing applause from the packed auditorium, a testament to the high emotions in the two months since the abrupt announcement that the school will be closing.

“Mother Katharine Drexel prayed in this church. She walked this ground. She was a part of this school. She lived on Magazine Street. This is sacred ground, ladies and gentlemen. You are a part of the dream of Katharine Drexel,” said Keith Doley, an alumnus who called attention to the fact that the school once had male students. “We have this sacred ground and there is no way in the world we are going to lose it. This is our house, and we are going to take care of it and protect it forever.”

In addition to Atkins, Doley and Roby, other alumni involved in the purchase are Edwin Lombard, Shantell Payton and Piper Griffin. Attorney Fred Herman said the alumni group hopes to have the purchase of the school grounds finalized by July 1, though there may be “twists and turns” along the way.

The school currently enrolls 245 students, but Atkins said the rebranding and new energy in the school may lead to growth back to its capacity of nearer 400. She said the alumni group is already working toward securing a faculty and administration, and that it will be “familiar to the students of Xavier Prep.”

Tuition will see a “modest” increase, Roby said, though it will remain below average for the area. Students in 7th and 8th grades will pay $4,500 in annual tuition, and high-school tuition will be $6,500 per year. Organizers had registration packets available for students in the auditorium, and Atkins introduced six 6th-grade students from St. Stephen’s who have already agreed to attend the new school in fall — as well as held up the first tuition check made out to the school, to more applause.

“Everyone in the family worked together to get this done,” said school president Joseph Peychaud. “Our parents stayed the course. They trusted. They believed. That is what this institution is about.” 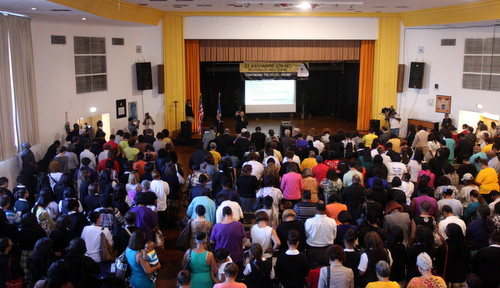 Audience members at a meeting about the future of Xavier Prep bow their heads during a closing prayer. (Robert Morris, UptownMessenger.com)