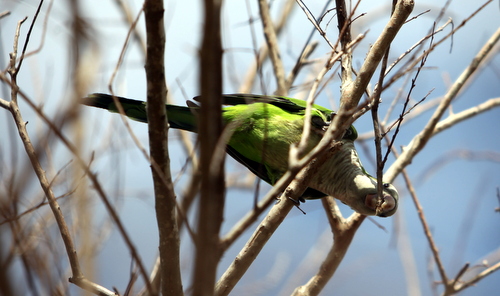 A wild monk parakeet pulls a twig from a tree outside the Newman Greenie House on Monday afternoon to add to its nest in a nearby stadium light. (Robert Morris, UptownMessenger.com) 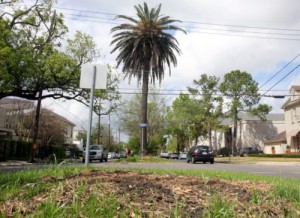 Trees have been removed from the Jefferson Avenue neutral ground from Magazine to Danneel Street, and the clearing will continue later this year as preparations continue for the next phase of a major drainage project. (Robert Morris, UptownMessenger.com)

When officials announced last month that a major new drainage project on Jefferson Avenue would begin in April, many Uptown residents worried about the effects on traffic, parking, rainwater drainage during the actual construction, and the removal of trees in the neutral ground.

But some residents who live closest to the avenue had a slightly more exotic concern: What would become of the little green monk parakeets that have colonized the palms along Jefferson Avenue?

The tree clearing began April 1 in preparation for the $46 million installation of a new box canal under the Jefferson Avenue neutral ground between Constance and Dryades streets over the next three years. The project will ultimately involve the temporary removal of the neutral ground to allow contractors to get under the street, and the space will also be used to keep at least one lane of northbound traffic on the street while they are working, officials said in February.

The trees along Jefferson Avenue include a mix of camellias, crepe myrtles and tall palms, and between 20 and 40 years ago they were colonized by monk parakeets, a bird native to Argentina that likely escaped or were released in the area. Surveys between 2003 and 2009 showed that the parakeets show an almost equal preference for building their large nests in one of two places, palm trees or artificial towers, according to a 2012 article in the Journal of Louisiana Ornithology by Xavier chemistry professor emeritus John Sevenair.

Individual colonies of the parakeets can be found around New Orleans, Sevenair said, but Jefferson Avenue is unusual in that it provides so many palms for them in a concentrated area.

“You’ll find groups of them where there are groups of potential nest sites, including rows of palms that don’t get trimmed (as on Jefferson — there’s too much trimming on Carrollton) and stadiums with light poles that aren’t cleaned off too frequently,” Sevenair wrote Tuesday in an email interview with Uptown Messenger.

One of the doomed palms stood until last week in front of the home of Alicia Andry. As soon as it came down, Andry said her daughter mentioned that she’d miss their noisy chirps outside her bedroom window.

“I guess they’ll find another place,” Andry said. “Hopefully they’re in another tree.” 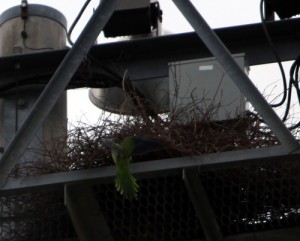 A monk parakeet returns to its nest in the Newman stadium lights with a twig. Monk parakeets are known for their large nests that can feature up to 20 individual chambers for different birds. (Robert Morris, UptownMessenger.com)

With the palms gone, the parakeets do have one nearby point of refuge: the tall football field lights at the Isidore Newman School. Phillip Wallace, the assistant principal of Newman’s middle school and locally-known birder, was quickly able to point out their large colonies just outside his office. It is too early to determine whether birds from the palms that were removed had joined the Newman population, Wallace said, and Sevenair suggested that those already in the lights will likely keep the dispersed ones out.

The birds are actually considered an invasive species — they are known to damage fruit crops — as well as a nuisance, for their tendency to cause electrical shorts in the structures they build their nests on, Wallace said. But for the nursery-school children at Newman’s Greenie House, where the parakeets come every afternoon to pluck twigs for their nest-building projects, they are more like mascots, said teacher Laura Sanchez.

“You sit out here and watch those mean old crows,” Sanchez said. “I need a scarecrow.”

Monk parakeets have an unusually high tolerance for noise from nearby human activity, Sevenair noted: “They live on busy streets, put up with traffic, and survived Katrina as well as any other local birds.” When the second phase of tree clearing removes the remaining palms and parakeets from Dryades to Claiborne, the Newman birds will likely remain in their homes amid the lights.

If the proper tall Canary Island date palms are replanted after the project is complete (not a sure thing, because they too a non-native species despite their long history on Jefferson), the Newman birds’ offspring may then spread back into them, Sevenair speculated.

“The parakeets being displaced now will build somewhere else long before then,” Sevenair said. “[If] their offspring, or the offspring of Newman School parakeets, find the new trees, they might well use them.” 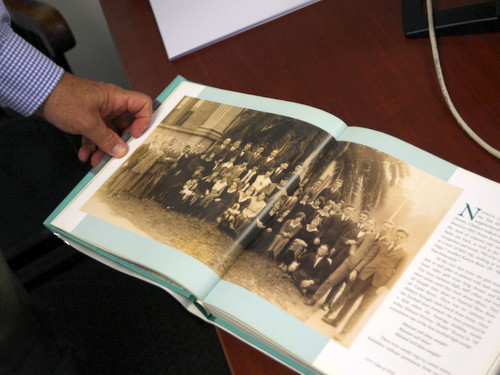