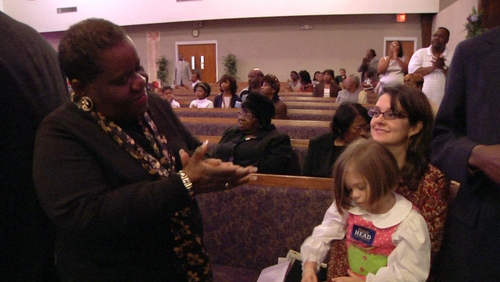 Stacy Head, right, beams at her aide, Barbara-Lacen Keller, in a scene from “Getting Back to Abnormal.” (courtesy of The Center for New American Media)

“Getting Back to Abnormal” — the documentary screening three times as part of the upcoming filmOrama festival at the Prytania Theatre — was never intended to focus on City Councilwoman Stacy Head. But Head’s controversial role in the post-Katrina political landscape of New Orleans combined with her unusual on-screen candor made her and staffer Barbara Lacen-Keller natural subjects for it, the filmmakers said.

“The fact that they let us film them was really good,” said Louis Alvarez, one of the four producer/directors. “A lot of politicians wouldn’t allow that.”

The film’s opening thesis is that in 2010, as Head approached her first re-election campaign, she had become “a lightning rod for all things racial,” and it does not shy away from many of her most controversial moments. Yet, in a phone interview Wednesday morning, Head said she has seen the film and was pleased with its outcome.

“I thought it showed the good, the bad and the ugly about New Orleans and politics and who I am,” Head said. “I don’t take myself too seriously, so I liked it.”

In the film, two narratives emerge — the narrow political story of Head’s re-election campaign, and the broader cultural story of how New Orleans was changing in 2010, particularly for its black communities. The two don’t explicitly intertwine — Head never pontificates for the camera on public housing, for example — but they merely alternate, each short segment on the personal dynamics of the election followed by a segment on the larger issues in the backdrop (such as the redevelopment of public housing, the construction of Brad Pitt’s Make It Right homes, the 50th anniversary of the integration of New Orleans schools, and even the Saints Superbowl victory.) 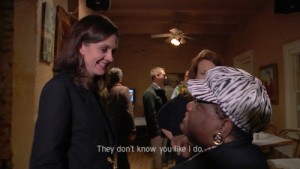 Barbara-Lacen Keller tells Head about her critics, “They don’t know you like I do,” amid the noise of Head’s 2010 victory party in a scene from “Getting Back to Abnormal.” The moment Head’s 67-33 victory was confirmed by WWL-TV, Head’s first question was, “Where’s Barbara?” (image courtesy of The Center for New American Media)

Local political junkies may find the character studies more interesting, and doubly so as the political narrative gives way to a more personal story of Head’s top aide and confidant, Barbara Lacen-Keller. Every scene with Head — often holding the viewer at bay with her self-deprecating wit — is immediately followed by a scene with Lacen-Keller taking over the frame with her vivacious defenses of Head.

When the film opens with a montage of criticism by callers during a campaign-trail interview at WBOK, the film does not show Head’s response. Instead it cuts quickly to Lacen-Keller outside the studio, mincing no words: “This is bullshit,” she says bluntly.

“I wouldn’t last a minute in this office if Stacy Head was a racist,” Lacen-Keller says moments later.

The film never lets the viewer forget that many black residents would have disagreed with Lacen-Keller. Many of her most difficult racial confrontations are played out: her disputes with Veronica White over the sanitation department, Tracie Washington calling her a racist after a city council hearing on public housing, opponent Corey Watson suggesting in a televised debate that Head privately uses racial epithets.

Alvarez, the director, said he does not take a strong opinion on the question. Rather than a “racist,” a term sometimes used in political name-calling, Alvarez said, the Stacy Head of 2010 was more “culturally insensitive,” in part due to a sharp tongue that may have since been somewhat tamed.

Head said that when the filmmakers approached her, she satisfied herself with some quick research that they had a reputation for fairness, and she agreed. As what she called “misogynistic” local media coverage of her intensified, however, she began to wonder if she had made the right decision, until she finally saw the film.

“I started second-guessing the access I gave to the filmmakers,” Head said. “Thankfully, they have been true to their word.”

Head ultimately won re-election in District B with 30 percent of the black vote, and the film’s epilogue notes that she has since won over some of her most ardent critics: Paul Beaulieu, the WBOK radio host who in 2010 called her “point guard for the shadow government” has since begun to view her as an effective agent of change, the film says. It also concludes that she is perfectly poised to run for mayor in 2018 — the line in the film that Head most strongly took exception to.

“They added that, trust me,” Head said. “No, no, no, that is not in my plan. Every political pundit thinks they know where I am, but they look at life through a political lens. I do not want to be a career politician. … I don’t stay up to two in the morning calculating my next chess move.”

In many ways, the film purports to be about the changes taking place in New Orleans in the first five years after Hurricane Katrina. But, in the some ways, it already feels dated: scenes from City Council in 2010 show many council members who have since left the stage, locations such as the boarded-up corner of Napoleon and St. Charles are conspicuously absent of newer landmarks like Superior Seafood, and the entire 2010 District B election is almost now a footnote in her career — Head has since been elected to an at-large seat in a much more divisive race, followed by an election for her successor that had almost the opposite racial dynamic.

In these moments, “Getting Back to Abnormal” may function best as a reminder of how quickly and dramatically the city continues to change today.

Getting Back to Abnormal, 90 minutes, screens at 7:15 p.m. Saturday at the Prytania Theatre (with Head and the directors in attendance), 2:45 p.m. Sunday, and 5:30 p.m. Wednesday, April 10, as part of the week-long filmOrama festival.