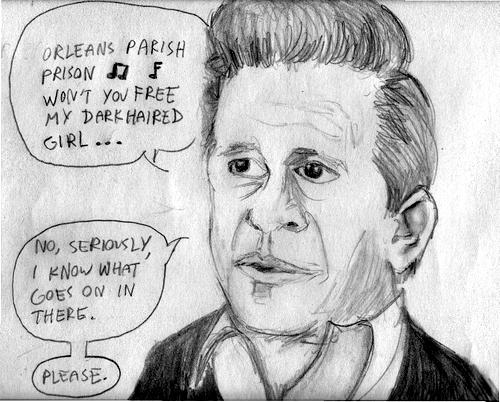 The ongoing clash over the cost of the consent decree governing Orleans Parish Prison (OPP) continues to bubble over.  This week we were greeted by the latest bombardment against Sheriff Marlin Gusman in the form of the release of a 2009 video featuring inmates openly mainlining heroin, smoking crack, popping pills, gambling, flashing cash, and even displaying loaded guns.  It looks like footage of a party at Marion Berry’s house.

Here’s a link to the video.  I’ve run it through a website that replaces the audio with “Yakety Sax” so it’s a smidge less depressing.

Mayor Landrieu, who has invested all his political acumen in the task of laying 100% of the blame on Gusman, quickly passed through a law requiring Gusman to play a “sad trombone” sound effect at the close of all his public appearances.  Well, not really of course —  although Landrieu did pass the buck, explaining how emphatically not shocked he was by the video, and that Gusman (that crumb-bum!) bears responsibility because “[t]he sheriff is the keeper of the jail.”

On one hand, Landrieu is technically correct.  This buck actually does stop with Gusman, who manages OPP.  On the other hand, the issue is a bit more complicated than that.  Gusman didn’t create the inhuman monster of OPP, he just inherited it from his predecessor, the irrepressible Sheriff Foti-stien.  Specifically, Gusman inherited the perverse incentive of the “per diem” funding structure, whereby the sheriff is paid a set amount by the city per inmate, per day.  This rate is presently $22.39 per day, although the city also throws in a few million for medical services from change it finds in its mattress.

Ironically, the per diem system was instituted following a lawsuit by OPP inmates in 1990 regarding poor conditions in the prison, but it has since become a straightjacket that encourages more inmates to be held for longer periods.  The city could have eliminated the system (because the agreement creating it lapsed in 2005) yet it has lumbered on, as much due to political inertia as anything else.  I suppose the prison just doesn’t have the political sexiness of building useless streetcars for tourists.

Gusman argues that OPP is underfunded by the city, that city officials should be shouldering at least part of the blame.  Superficially, at least, he seems to have a point.  The less than $23 dollars per day paid by the city is very low per-inmate spending.  Although the city supplements the per diem with dedicated spending for medical care, it amounts to a fraction of overall spending.

The bottom line is that our spending per inmate is on par with a rural parish, not a major city.  For example, Harris County Jail, which serves most of Houston, spends $45 daily per inmate.  That’s more than twice what the City of New Orleans spends.  On the other hand, we have more police officers per capita than Houston and more police spending per capita.  We spend liberally on police, more than our wealthier neighbors, and then get all tight-fisted when the bill comes due to pay for housing the criminals we’ve caught.

Landrieu argues that there is no evidence that the constitutional violations at issue in the consent decree are related to funding issues, but surely it makes sense that an underfunded prison will have difficulty meeting constitutional standards.  Also, since OPP is a local jail, it mainly houses low-level offenders.  Here, the NOPD is the gatekeeper for those arrests.  In the past, the NOPD has been notorious for making excessive arrests for minor crimes.  That has supposedly improved since the city council passed a law in 2008 prohibiting arrests for many misdemeanors unless deemed “absolutely necessary,” and later adopted a similar policy for misdemeanor marijuana possession.   However, if OPP is so packed with low-level offenders that the city can’t afford a consent decree aimed at improving conditions to constitutional minimums, then perhaps we haven’t gone far enough.

Still, while Gusman may have a point, he still bears the largest part of the blame.  Many of the problems with OPP seem to stem from simple mismanagement.  I recall a few years ago trying to visit a client in OPP, only to be bounced from OPP to the House of Detention several times over the course of two hours before it was determined that my client was on “the docks,” a kind of limbo where they keep inmates being transported from one place to another.  I was barely able to see my client before the prison started another scheduled “lock-down.”  There didn’t seem to be any coordination at all going on, which is more about incompetence than proper funding.

Also, if inmates are actually able to smuggle loaded firearms into jail, you can forget about pointing the finger elsewhere.  Even with funding at low levels, the most basic levels of security should be maintained.  At present, I’d venture to say that the Keystone Cops maintained a greater aura of competence than the deputies at OPP.

Ultimately, though, the narrative here is not reducible to Gusman being a bad sheriff.  There are lots of factors that have led us to this point, and given the degree to which our criminal justice system is now invested in this perverse system of financing, it’s going to take major reforms to pull us out.   Sadly, with Gusman putting his fingers in his ears and Landrieu playing politics, the chances of genuine reform appear rather grim.

Note:  If you recognize the reference in the title of this piece, you’re probably a member of my generation, and you probably groaned when reading it.  I can only offer my insincere apology.