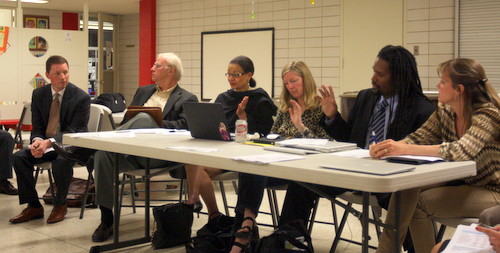 Lycee Francais board members Jacquelyn Simon, Paige Saleun and Jean Montes (center) vote in favor of considering nominees to the board individually, while board members Dan Henderson and Catherine MacPhaille prepare to vote against. (Robert Morris, UptownMessenger.com)

Loud protests of broken promises filled the cafeteria of Lycée Français de la Nouvelle Orléans on Monday night as the school’s governing board made an 11th-hour reversal on its earlier plan to add a group of new members en masse, instead picking through the six nominees individually and rejecting one popular candidate on a split vote.

Last month, the Lycee board approved a plan to empanel a five-member nominating committee to recommend new board members, and to give those nominees an up-or-down vote as a single slate. Over the course of the last two weeks, the nominating committee narrowed a pool of 29 applicants down to six people that all five members recommended unanimously, and the full LFNO was widely expected to give them final approval Monday night.

After committee chair Jeff Teague presented the nominees, however, board member Paige Saleun said she would prefer to consider them individually. Board chair Jean Montes criticized the committee for not forwarding him information on the nominees, and said he was only learning of their recommendations for the first time as Teague read them.

“I’m taking the time to do what is right,” Montes said.

After extended protests from most of the more than 20 parents in the audience — and a fair amount of procedural maneuvering — the board voted 3-2 to review the candidates individually. Saleun and Montes were joined by Jacquelyn Simon, and they were opposed by Catherine MacPhaille (who served on the nominating committee) and Dan Henderson. In public comments, various parents said they were “stunned,” “discouraged,” “appalled” and “saddened by the current board’s inability to step aside gracefully.”

Nominating committee member Robert Bell said the meeting’s turnout of 20 would have been much higher had parents known the board planned to deviate from the plan it had previously set.

“I am heartbroken that this is occurring,” Bell said. “You are violating the trust of the people who said, ‘I finally don’t have to come to another meeting.’ ”

Several parents suggested that the last-minute change of plan represented a violation of the public notice requirement of state open-meetings laws, at least in spirit.

“How do you not give proper notice of something this fundamental?” said Robert Rachal, who previously spearheaded a grievance effort against the board but had recently been full of praise for the nominating committee’s work. “You can’t just change the rules in the middle of the game.”

Once the individual review began, three nominees — Erin Greenwald of the Historic New Orleans Collection, attorney Alysson Mills and educator Elizabeth Rhodes — were unanimously approved. Two more, attorneys Ben Castoriano and Tim Gray, were approved by a 3-2 vote, when Simon switched to side with MacPhaille and Henderson in their favor. But the sixth, Mary Jacobs Jones of The New Teacher Project, was rejected by a 3-2 vote.

Jones previously taught under former Lycee principal Jean-Jacques Grandiere at a similar school in San Francisco, and Saleun said their relationship remained too close for her comfort. Teague said that he had raised that concern with Jones, and that Grandiere had rented a room in Jones’ family’s house for the first six months after he moved to New Orleans to work at Lycee. Teague said he was satisfied, however, that Jones’ friendship with Grandiere would not cloud her judgment on the school’s behalf.

Many of the parents — some of whom showed up midway through the meeting when they learned the nominations were being unexpectedly questioned — noted that Jones was unanimously recommended by the nominating committee. When Saleun, Montes and Simon voted 3-2 not to accept her on the board, loud groans and cries of frustration went through the cafeteria.

After the meeting, Teague said he deferred to the board’s decisions and would move forward with seeking a second round of nominees (applications are being accepted through April 19) as was previously planned. Some of the parents in the audience took a pragmatic view, noting that the new board members will be seated by the next full meeting, and that the nominating committee could simply re-submit Jones’ name and possibly get a much different outcome.

Consultant Jeremy Hunnewell, who crafted much of the process up until Monday’s meeting, said he would maintain an optimistic outlook.

“There are five good board members coming on,” Hunnewell said. “That’s a better result than zero.”