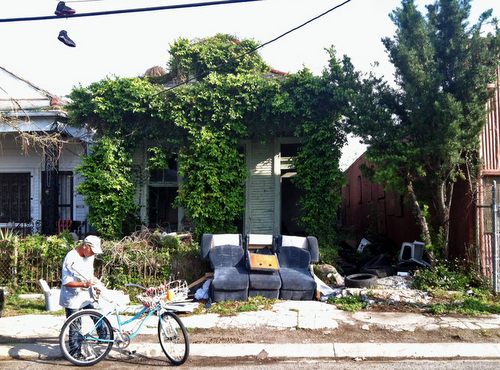 Once upon a time the ivy-covered, faded green house with broken glass panes and missing siding at 3527 South Liberty in Uptown New Orleans probably was a family home, a quaint if not classically styled shotgun with sidehall elements, wrought iron fencing and floor to ceiling windows facing the street.  Today it sits beaten to hell but still seemingly structurally intact, an eyesore of eyesores, and consumed by litter including household discards, dozens upon dozens of old tires, and yes, even hypodermic needles.  Additionally according to nolaassessor.com/ there is a code-enforcement lien, and the city’s new Blight Status site shows a hearing next week on 11 violations found in January 2013.

This kind of scenario represents the face of blight in the Crescent City today.

Why?  While this space might seem like an altogether too common story, it is and it isn’t.  Where’re the owners?  Are they heirs?  Who knows?  Typically, the “heirs” part is pretty standard stuff in terms of local real estate left to waste.  The heirs are either incapable or unwilling (or both) to do anything about the property.  And the way the law is written they have almost every opportunity to rectify a tax sale, writ of possession, or acquisitive prescription.  And this is where the uncommon comes in.  Many properties owe back taxes, but not all have a blight judgement attached – whether they may appear to be blighted or not; that’s a formal process with mixed results.  A blight lien can be nothing more than a speeding ticket, and if paid the blight may remain in place.

How?  Choose a reason.  The city might be shown fraudulent documentation showing the blight remedied.  It happens.  The inspector may never inspect.  Quelle surprise.  Or maybe the addresses were switched.  Municipal addresses after all have no real legal bearing and mistakes happen therein all the time.  Just ask Safety & Permits.  How almost becomes unimportant, because the end result is the same.  The blight may remain.  Meanwhile a makeshift dump site may crop up, a fire hazard ensues, and environmental issues get tossed aside in quantity.  Do you know how a dead tire gets disposed of in Louisiana?  Legally by fees.  Illegally?  Look no further than the blight nearest you.  But if the blight is valid and actively on the books, one may acquisitively prescribe.

When?  The clock is ticking, and it’s a competitive world.  If you have the funds go down this path, hire a title attorney that knows what they’re doing, and they can guide you.  But the sooner, the better.  Think of acquisitive prescription as a tax sale where you compete against yourself.  You find the property.  You pay the bills.  You do your legal due diligence.  No party working against you bidding down percentage of ownership for a single tax year like a traditional tax sale.  And likely not on anyone’s radar either.  Except the adjacent neighbors that’ll get dibs before you can really get motoring on the process, but is that really a bad thing if it helps facilitate the blight back into commerce?  Of course not.

Where?  All over our fair city.  Have an old favorite that gets the better of your attention when you drive by it?  Look it up!  It could be a good candidate.  Keep in mind though that unlike a tax sale whereby the winning bidder is attached to title thereafter, this path – also known as squatter’s rights – requires layers of legal notices and places you on title only at the end and only at behest of a judge.  It’s a three-year process at best, but one that given patience, care, and a little luck could be lucrative.  To be sure, this facet of real estate is not for the faint of heart, but given the swath of inventory out there chances of success are likely in your favor.

But then, we could always change the law, right?

7 thoughts on “Jean-Paul Villere: The face of blight”