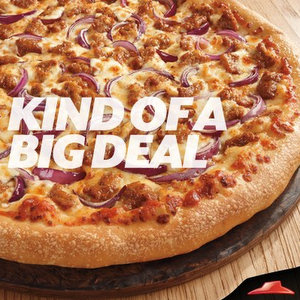 When more than 40 Pizza Hut locations suddenly closed across New Orleans in January of 2011, some saw it as an early sign of the Mayan apocalypse. That date came and went last December without the world ending, and, right on cue, Pizza Hut is now preparing to return to Orleans Parish.

In a brief hearing before the City Planning Commission on Tuesday afternoon, architect Donna Accardo presented plans for a Pizza Hut to open in a corner suite at 1801 Rousseau Street within the River Garden development. The restaurant will have a takeout counter and small seating area for 12 people, according to the limited information in the application for a fast-food restaurant.

The restaurant is actually one of several slated for within the New Orleans city limits — the first of which will be a location slated to open in late May in the Mid-City Market development, said Pizza Hut operations manager Michael Moreland in a phone interview after the meeting. The River Garden space is one of several more in the planning stages, and no opening date has been established, Moreland said. All the locations will have delivery, he said.

“We should have the whole city covered again in the next year,” Moreland said. “We should be able to reach everyone in the greater New Orleans area.”

Only one person spoke in opposition to the restaurant, Mark Redding of the nearby Irish Channel, and he said he wasn’t strongly opposed. With the Subway already there, Redding said he is simply concerned about a proliferation of chain restaurants in the neighborhood, and urged caution in handing out conditional uses for fast food.

“I’m concerned about the character of my neighborhood just like everyone else is,” Redding said, describing the growth of chain restaurants on South Claiborne. “We don’t want to fight these same things on Jackson Avenue. I don’t want it to be a haven for drive-through restaurants.”

City planners noted that the River Garden development has a number of retail tenants, including clothing and video games stores, and that the use for fast-food will only apply to the one specific unit Pizza Hut plans to occupy. With that information, the Planning Commission quickly voted in favor of the restaurant.