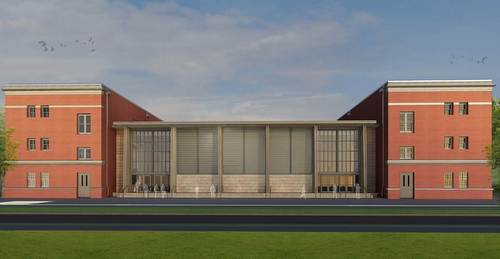 Rendering of the new Sophie B. Wright gym from the Jena Street side. (courtesy Jacobs / CSRS Program Management) 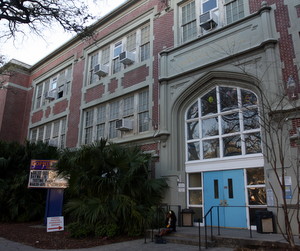 The long-sought dream of the Sophie B. Wright Charter School community of a gym on campus appeared one step closer to reality Thursday night during a meeting to review plans for its construction, but students and teachers will first have to spend the next two years in an unfamiliar campus in west Carrollton.

“We are just keeping the big picture in mind,” said Sophie B. Wright principal Sharon Clark after the meeting. “We’re getting a state-of-the-art facility to educate the children of New Orleans, and it doesn’t get any better than that.”

The Recovery School District will choose contractors for the $23.7 million project this spring, and construction will take 26 months, with the goal of the school returning to its home in the fall of 2015, officials said. When they return, classrooms will have been enlarged, hallways will be widened, termite damage will be repaired and wooden-floors restored, the school will be made handicapped-accessible and, in the biggest change, a modern full-court gym will be placed in the center of the campus.

The school was built in 1912 — 101 years ago — by famed New Orleans civic architect E.A. Christy, and Mac Ball, the architect designing on the renovations, said he is honored to be working on the project.

“This is a beautiful building,” Ball said, flipping through slides of the building in the early 20th Century. He added, “It’s kind of the archetypal school building that you see around the city.” 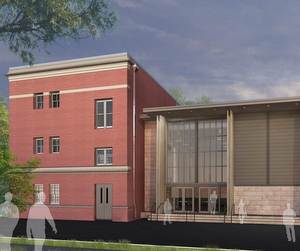 Several Jena Street neighbors asked that the renovations to the school be used as an opportunity to improve how aspects of the school’s operations affect them. Since the school acquired its own school buses two years ago, the stretch of Jena Street they use for dropoff and pickup has subsided by about four inches, they said.

Part of the renovation plan pulls the school buses onto school property for offloading students, Ball replied. Residents suggested that if that’s the plan anyway, it would be better to do so on the Prytania Street side. Lona Hankins, director of capital improvements for the Recovery School District, said officials would bring up that idea with the city Department of Public Works.

During the two years of construction, Sophie B. Wright students will be placed in the James Weldon Johnson building in west Carrollton. Shootings are much more common in the streets around the Johnson site than they are around the Sophie B. Wright building at Prytania and Napoleon, and Clark said the location is “not ideal.” However, the building itself is in good condition, “clean and spacious,” and the violence hasn’t come onto the Johnson school grounds.

Ultimately, she said, after years where the only improvements to the Sophie B. Wright building were funded by students’ sales of snacks during Mardi Gras, the uncertainties of the Johnson site are worth enduring.

“We don’t want to the swing-space move to stop the renovations,” Clark said. 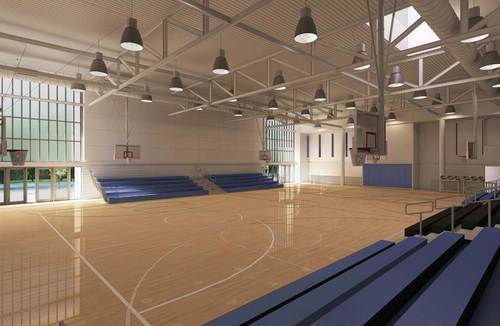 To read more details about the renovations to the Sophie B. Wright building, click to read our live coverage below.