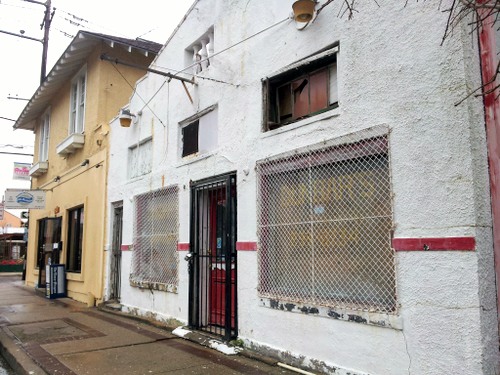 The former Dunbar’s restaurant at 4927 Freret is slated to become “The Muse on Freret,” a second location for owners of Three Muses on Frenchmen. (Robert Morris, UptownMessenger.com)

Shuttered since the floodwaters that followed Hurricane Katrina in 2005, the former Dunbar’s building on Freret Street in Uptown New Orleans may soon be a popular restaurant once again, as the owners of Three Muses on Frenchmen Street said Monday morning that they plan to renovate the site for a second location.

The new restaurant, to be called “The Muse on Freret,” will focus primarily on dining, co-owner Sophie Lee told members of The New Freret business and property owners association.

“This one we view as food-centric,” Lee said. “At Three Muses on Frenchmen, we focus on each thing equally, food, drink and music. We’d like to have music as well, but not the Frenchmen street vibe — maybe solo piano or acoustic jazz duos.”

The food will range from tapas-style small plates to regular portions or even family-size servings, so that a larger table could split an item, said co-owner Daniel Esses. The restaurant won’t keep “super-late hours,” he said, and the music will be more in the background than the front-and-center performances such as Glen David Andrews on Frenchmen Street.

“Frenchmen is a lively street, so our place is pretty lively,” Esses said. Frenchmen Street evolved based on the preferences of its customers, he said, so expects the Freret location to do the same.

Developer Jessica Leone of Wayne Leone Property Management said that they are still finalizing plans for the layout of the kitchen and the restaurant (which seats about 49 people). Their construction crew is ready to do, so once the plans are finished, construction can begin immediately and proceed quickly. They normally shoot for August openings for new projects, she said, but stressed that “The Muse” project does not have a timeline yet.

The annual Freret Street Festival will be Saturday, April 6, running the length of the corridor from Napoleon to Jefferson with four music stages, said Greg Ensslen. Last year’s festival was deemed such as success that the layout and many of the other components will remain exactly the same — businesses will have space in front of their front doors for their own booths, sidewalks will be completely open, and bike racks will be available at both ends of the corridor.

One issue that won’t affect the festival is the sidewalk construction on Freret. City officials said that the work that remains incomplete or unsatisfactory along the corridor is now being negotiated by the city’s legal department, and that the issue of who will correct the problems won’t be resolved until after the festival takes place.

Finally, the ongoing discussion about the creation of a security district in the Freret neighborhoods funded by a fee on property-tax bills will continue Tuesday night at the Neighbors United meeting at 6 p.m. at Samuel Green Charter School.