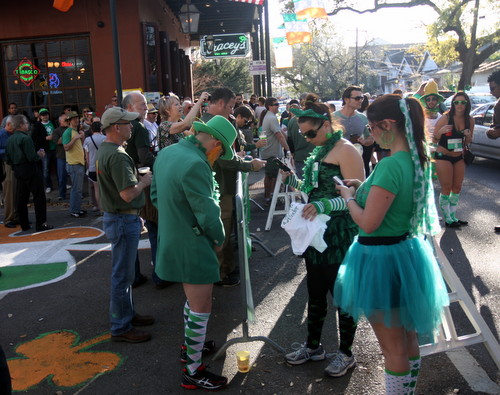 Revelers mix combine green attire with their skivvies in preparation for the inaugural Shamrockin Underwear Run outside Tracey’s bar in the Irish Channel. (Robert Morris, UptownMessenger.com)

The spirits of the Emerald Isle flowed freely on Third Street in the Irish Channel on Thursday afternoon for the annual block party launching St. Patrick’s Day weekend festivities.

In addition to the usual selection of green hats, hair, shirts, shoes, coats and kilts, undergarments played a larger-than-usual role in Thursday’s festivities, as part of the first-ever Shamrockin’ Underwear Run. The one-mile run earned participants three free beers from Tracey’s, and all proceeds from it and an 8k on Sunday are to be donated to the Wounded Warrior project, according to the event website.

On Saturday, revelers will add floats and cabbages to the mix with the annual St. Patrick’s Day parade through the Irish Channel, which starts at 1 p.m. on Magazine Street, heads up Jackson Avenue, then to St. Charles, Louisiana and back down Magazine.

And on Sunday, St. Patrick’s Day itself, the block party will return to Third Street. 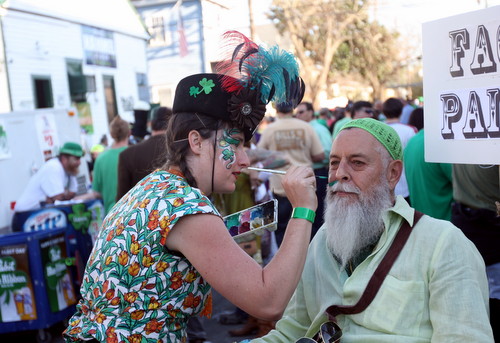 A man has his face painted between Tracey’s and Parasol’s during the annual block party on Third Street. (Robert Morris, UptownMessenger.com)