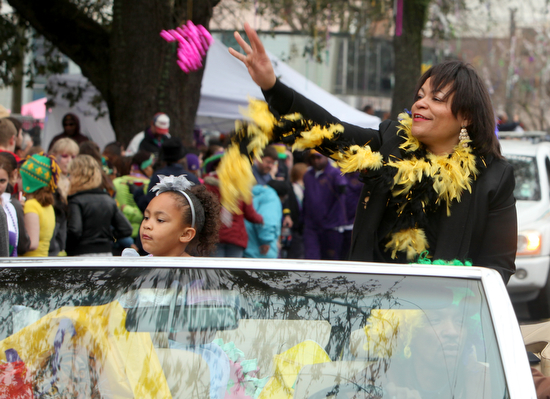 Councilwoman LaToya Cantrell rides in the Krewe of Zulu on Mardi Gras day, 2013. Cantrell says she has been stopped on parade routes and thanked for her efforts to increase enforcement of parade-safety laws. (UptownMessenger.com file photo by Sabree Hill)

New Orleanians could see clearer laws about the placement of ladders, more control over the locations of portable toilets, and more efforts to clear public spaces during and between Mardi Gras parades next year, based on a number of ideas Uptown residents discussed with their City Councilwoman on Saturday afternoon.

The city already has laws governing parade-route conduct, but a lack of enforcement over the years has meant growing encroachment of shared spaces by “homesteaders,” as some Uptown residents called the people who stake out large areas of the sidewalk or neutral ground, roping off areas, erecting tents or creating a wall of ladders along the curb. City Councilwoman LaToya Cantrell agreed with those residents Saturday that she would support more citations for violators, but the bulk of the discussion was on ways to increase voluntary compliance — leaving police to the more important public-safety functions like taking guns off the route.

Among the ideas pitched:

Creating a fixed distance between ladders and the curb. Current law says ladders must be placed back as many feet as they are tall, a standard that literally changes from ladder to ladder. Residents said one fixed distance would be easier to understand.

Signs showing that distance. If signs reading “No ladders beyond this point” were affixed along the route, people bringing ladders would know better where the line was, and other residents or police would have an easier time pointing it out to them.

Holding toilet companies responsible for the burden for illegally-placed portable toilets, such as on private property they don’t own or public property. If the companies stood to risk a fine or impounding when residents bring toilets in the back of pickup trucks, for example, they would find ways such as high security deposits to keep renters from losing them.

Creating more public places to go to the bathroom. The city could provide more, as it does on Napoleon Avenue. Fixed-position vendors could be given permission to bring them and charge for their use. Schools and churches could be given greater incentive to offer their own facilities. Residents agreed that more places for parade goers to legally ‘go’ are needed. “If we don’t provide that, then they will find an alternative — which is your lawn,” Cantrell said.

Disposing of furniture and other items left on public property after parades. City workers could collect ladders, tents and other objects abandoned overnight when the street cleaning begins, residents suggested.

Resuming normal street car service quickly after parades. When the streetcars stop, people quickly set up tents and grills on the tracks. Cleaning the neutral ground would allow the street cars to run and keep the areas clear. Some residents even suggested keeping the streetcars running during parades for the same reason, but Cantrell and NOPD officers present said that would likely pose too great a safety issue.

Making both sides of St. Charles a “no parking” zone during parades. Currently, parking is allowed on the Uptown-bound lanes, making that side fairly narrow. Resident Susan Muchmore suggested that if that parking lane was kept clear, emergency vehicles could get through much more quickly on the wider lane. “People have no place to go,” when a vehicle is trying to pass, she said. “They’re up against cars.” Less parking on St. Charles might also discourage some of the larger installations of furniture, residents noted.

Saturday’s meeting was an informal brainstorming session, with none of the ideas adopted or acted upon. Cantrell said they all merit real consideration, however, and promised to explore each of them with the appropriate city agencies, the draft a list of those that may be possible. From there, she said, she’ll introduce an ordinance to the City Council, and will count on her constituents for their support.

10 thoughts on “Changes to Mardi Gras ladders, toilets and parking all under consideration for 2014 parades”