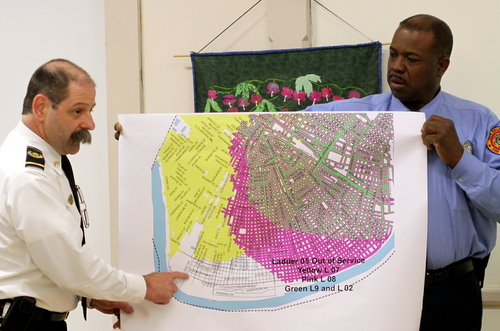 New Orleans Fire Department assistant superintendent Tim McConnell (left) points to the Audubon Riverside neighborhood on a map of ladder-truck coverage of Uptown after upcoming cuts. The yellow and pink areas can be reached by a ladder truck within eight minutes, but the unshaded area will take longer. (Robert Morris, UptownMessenger.com) 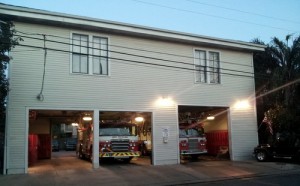 The ladder truck remains in the far-right bay of the Arabella fire station on Tuesday evening. (Robert Morris, UptownMessenger.com)

After upcoming budget cuts to the New Orleans Fire Department are complete, some Uptown riverside neighborhoods will be too far for a ladder truck to reach within the nationally recommended standard of eight minutes, fire officials say, though a pumper truck on Arabella Street will still be able to respond to a fire within four minutes.

Manpower issues have been looming for the department for years, Assistant Superintendent Tim McConnell told the Audubon Riverside Neighborhood Association on Tuesday evening, but the staffing levels have been maintained until recently through federal grants. Knowing that those grants were soon to expire, the department began looking for the most efficient way to redeploy its firefighters across the city last year, McConnell said.

In a working fire, the most crucial part of the response is to get a pumper truck filled with water to the scene within four minutes, so firefighters can immediately begin attacking the blaze, McConnell said. Other equipment, such as the larger ladder trucks, should ideally follow within eight minutes. NOFD officials decided that initial response was most important to save, and thus that no pumper trucks would be cut from the budget, but that only left ladder companies to cut, he said.

“Getting water on the fire is the biggest thing,” McConnell said.

For Uptown, the four-man pumper truck will remain at the Arabella fire station, but the ladder truck is expected to be taken out of service some time this summer, depending on how quickly firefighter staffing levels decline due to retirements. The two closest remaining ladder trucks will be at the stations at Carrollton and Claiborne and at Baronne and Martin Luther King, and neither can make it into the neighborhoods past Magazine Street from Napoleon up to Audubon Park in less than eight minutes — nine or 10 minutes is a more realistic expectation, McConnell said.

McConnell stressed, however, that the cuts won’t change the number of firefighters who are deployed to fires in the neighborhood — it will just take longer for one of the backup units to arrive. And even then, the impact will be rare, he said. While the ladder truck rolls from the Arabella station on average twice a day, only 3 percent of its calls involve working fires, he said.

One other ladder truck at the Old Gentilly station will also be cut, McConnell said. But removing them from any other stations — or closing a station altogether — would have left far larger areas of the city without a ladder that can reach them in eight minutes.

The department is applying for renewal of the federal firefighter-manpower grants, McConnell said. And if funding can be restored to the department, he noted that it is much easier to return a truck to an open station than to reopen a station closed altogether.

Several members of the audience of about 30 people said they were concerned about the loss of a ladder truck in an area with so many large medical facilities, such as Children’s Hospital or Poydras Home. Although McConnell said that the budgetary decisions are largely made at this point, association president Sharon LaHoste said the board will consider its position on the cuts and whether to send a formal statement of it to city officials. 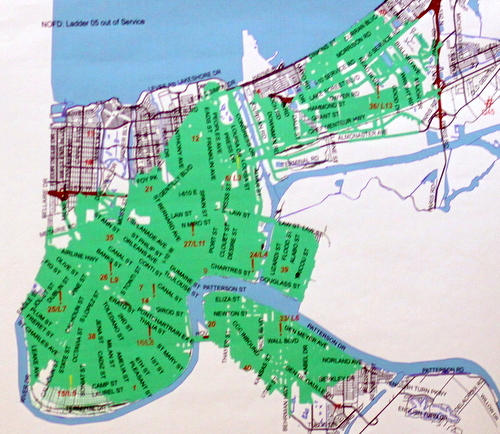 Another version of the map above shows areas of the city — in green — that a ladder truck can reach in eight minutes or less.

NOPD Second District Commander Paul Noel also addressed the association about safety issues in the neighborhood. To read our live coverage of the meeting, see below.

One thought on “Loss of ladder truck on Arabella will slow response time to Uptown neighborhoods along the river, officials say”