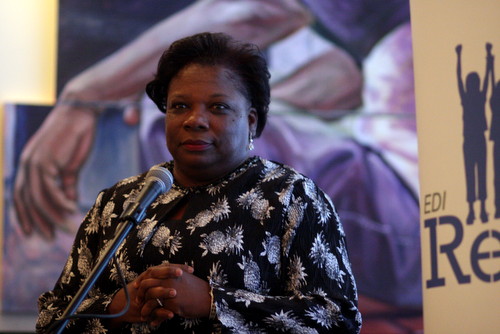 Leona Tate, who was one of three young girls to integrate the McDonogh 19 school in 1961, discusses her continuing efforts to improve public education in New Orleans at a Sunday night mixer at Oak Wine Bar. (Robert Morris, UptownMessenger.com)

A “unity piece” given to civil-rights hero Leona Tate by members of the Orleans Public Education Network on Sunday. (Robert Morris, UptownMessenger.com)

In a show of unity that spans generations, a hero of the civil rights movement who endured death daily threats as a 6-year-old integrating her New Orleans school joined forces Sunday night with a relatively new group of local education activists — many of whom were born decades after her first day of school faded from the headlines.

On November 14, 1960, Leona Tate was one of three 6-year-old girls escorted by federal marshals past a screaming mob into the previously all-white McDonogh No. 19 Elementary School, just as Ruby Bridges was at Frantz Elementary the same day. Those mobs and their death threats persisted throughout the school year, and Tate would go on to integrate several other New Orleans schools as she grew into higher grades.

Throughout her life, Tate has remained an advocate for public education, creating the Leona Tate Foundation for Change to increase opportunities for New Orleans schoolchildren, get the community more involved in education and advocate for the restoration of McDonogh 19. Several weeks ago, Tate became a member of the Orleans Public Education Network — a nonprofit established after Hurricane Katrina to increase the public’s role in decision making about rebuilding the New Orleans schools system — and to celebrate that partnership, OPEN held a networking night and presentation to her Sunday evening at Oak Wine Bar in Carrollton.

Among Tate’s current projects are an annual six-week summer camp for neighborhood children, in part to help them and in part to raise awareness of the need to restore McDonogh 19. She is also planning to introduce new scholarships this year, she said, for students planning to study criminal justice.

“Whatever we can do to stick together to help all the children in our communities, that’s my plan,” Tate said.

Patrick Young, an organizer for OPEN, said people he met had been encouraging him to link up with Tate for sometime, but he was surprised to find she didn’t have the support he would have expected.

“What I find strange is that she didn’t have as many people in her corner as I thought she would,” Young said.

One of OPEN’s projects in the Uptown area has been partnering with the Carrollton United group on behalf of Johnson Elementary and the former Priestley site. Many community members worry that Johnson’s out-of-the way location in west Carrollton places it in close proximity to street crime, but and feel moving it to the higher-profile site of Priestley on the major Leonidas thoroughfare would make it safer. The Recovery School District has announced that Johnson will close after this school year — with Sophie B. Wright high school likely moving in for two years during renovations to their Napoleon Avenue campus — but Priestley’s fate remains uncertain.

On Saturday, Young and Carrollton United member Betty DiMarco vowed to keep fighting for more public input into the use of those two sites.

“Even though we lost the fight to keep Johnson open, we gained something by joining together as a family,” Young said.

As part of Sunday evening’s event — which also included several spoken-word performances — Young invited DiMarco and the numerous other activists in the crowd of 80 or so to take the microphone and describe in brief their work and their needs. Among them, a Teach for America teacher asked for more community role models to come speak to his students, for example. A Dillard professor described his students’ need for community service projects, and an organizer of a youth-tutoring organization in the Ninth Ward asked for more volunteers.

Bringing together these types of efforts, Young said, is part of the reason for OPEN, with the expectation that together they should be able to bring about results.

“The size of New Orleans, we should be able to talk to somebody and make it move,” Young said.

“Now that I see these young faces in here, I know it’s not,” Tate said. 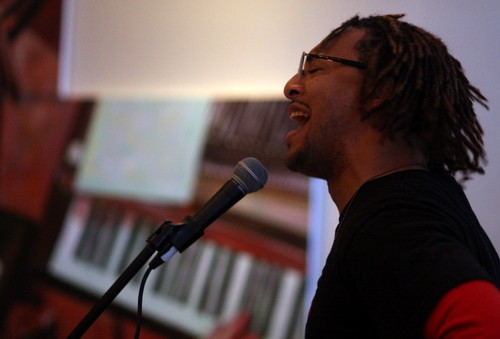