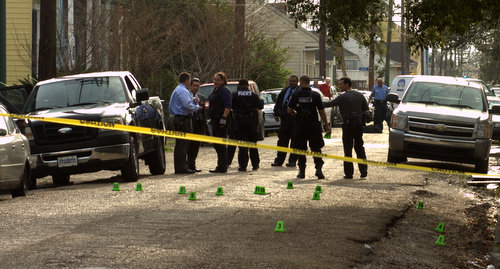 Police officers stand amid shell casings marking the scene of a fatal shooting on Chippewa Street in the Irish Channel on Thursday afternoon. (Robert Morris, UptownMessenger.com)

An 18-year-old man was gunned down in the middle of Chippewa Street on Thursday afternoon, authorities said.

Police were called to reports of gunfire around 2:30 p.m. at the intersection of Washington and Chippewa, where the victim had apparently been standing next to a truck when he was shot, said NOPD Officer Hilal Williams, a department spokeswoman. Police believe the victim ran partway down the block before collapsing, and he was pronounced dead on the scene.

The victim, Nolan Alofipo, was the father of a 2-year-old girl, said his older sister, Thelma Lee.

“He has a daughter. He loved his daughter,” Lee said, choking on tears. “My brother was the nicest person.”

The family all used to live in the Irish Channel area, but more recently had been living downtown, she said. She had seen him earlier in the day, when he said he was coming Uptown to visit friends.

He gave no indication that he might be in any kind of danger, she said.

One neighbor who lives near the intersection said he was sleeping when the gunshots rang out, but he jumped up to see what was going on.

“By the time I could put my shoes on, there was a police car in my driveway,” said the man, who asked not to be identified.

Chippewa is a block from a corner store at Washington and Annunciation where two men were wounded in a shooting in late November. Neighbors have long complained about violence there, but Chippewa Street is usually much quieter, said another resident who stood in his doorway to watch the murder investigation on his street.

“This used to be really bad right here, but hasn’t been bad for a long time,” he said.

Another man watching, however, said he steers clear of the young people who hang around in the streets, no matter where they are.

“Any time they catch you around here,” he said, “they don’t care where you are. You caught.” 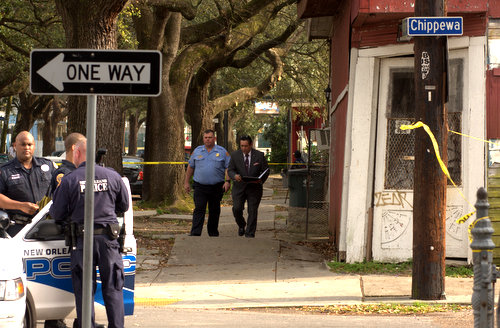 4 thoughts on “Man, 18, shot to death on Chippewa Street in Irish Channel”