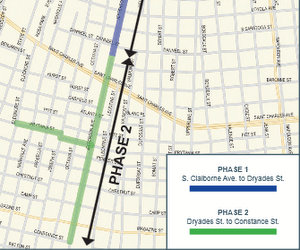 The section of Jefferson known as Phase II will begin construction in the coming months, followed shortly afterward by Phase I. (image via swbnosela.com)

Following work that has already begun on South Claiborne and Napoleon avenues, contractors will embark on a project in the next few months to install a new box canal under the neutral ground on Jefferson Avenue — with a fourth project on Louisiana Avenue in the foreseeable future.

“By this time next year, Louisiana, Napoleon and Jefferson will all be under construction,” Col. Ed Fleming of the U.S. Army Corps of Engineers told an audience of 150 Uptown residents Tuesday night. “If you’re going to try to get from Claiborne to Tchoupitoulas, it’s going to be a little difficult.”

The four box Uptown canals are being installed as part of the $1 billion federal Southeast Louisiana Urban Flood Control program, a regional effort to mitigate flooding that began following a torrential downpour in 1995. The canals are intended to increase the volume of water that can be carried off of neighborhood streets and into the lake during heavy rains.

The next section to begin construction is technically known as Jefferson Avenue “Phase II,” from Dryades to Constance Street (plus a short spur onto Prytania to connect to Nashville Avenue), even though the vagaries of government contracting mean that “Phase I” (Claiborne to Dryades) will not start until a little later. The bid was awarded to Cajun Contractors last month, officials said. A schedule will not be agreed upon for about two months, but the $46 million project is likely to begin actual construction in roughly three months and finish in 2016.

The work itself has two major components. First, existing water lines must be moved out from underneath the neutral ground, which will have the added benefit of new water lines along the length of the avenue on both sides, officials said. During that portion, the neutral ground itself will be removed. Traffic will continue in both directions, but contractors will work in one lane, and cars will be given the former neutral ground area and the other lane.

Once water lines are installed, contractors will dig into the neutral ground itself to begin installing the box canal. During that portion, the blocks where they are working will only allow one-lane of northbound traffic, and southbound traffic will be detoured off of Jefferson.

Contractors will work in segments of two or three blocks at a time, and each segment will take roughly four to six months, officials said. They will begin at Dryades and work down toward Constance, and the streetcar will be taken out of service in summer of 2014 while they cross St. Charles Avenue with the box canal.

The audience of more than 150 people at De La Salle High School questioned how effective the project will be and its impact on trees, sidewalks and other issues, but City Councilwoman Jackie Clarkson — who was credited with helping the project’s creation while in the state legislature — urged patience.

“To get 65 percent of a $1 billion project paid for, you do live with more regulations,” Clarkson said. “We’re darn lucky we got it.”

To read live coverage of the meeting and its extended question-and-answer session, see below.