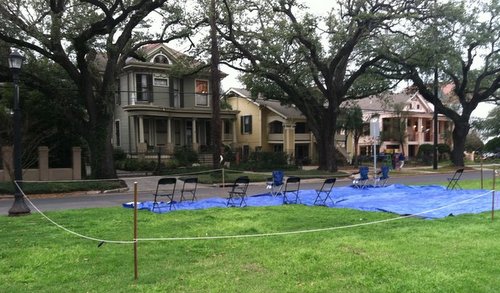 Someone staking a false claim to the neutral ground in the 2300 block of Napoleon on Mardi Gras Day 2011. (photo by Jean-Paul Villere for UptownMessenger.com)

Greetings 2013 Carnival enthusiasts!  The season is upon us, and in the past I’ve written some dos and don’ts in the form of top tens, a course of 101 and 201, to ensure a safe, happy, and mutually beneficial Mardi Gras experience.  Black outs be damned!  We have Flambeaux!  Come to think of it, in 2018, having Flambeaux on standby to illuminate the game wouldn’t be the worst idea.  Anyhow, enjoy the recap to follow, and for goodness sake’s take it to heart.

(1) Don’t park your car on the neutral ground.  It may not be signed and everyone else may be doing it, but you – and they – will all get tickets.  I see it every year.  And no matter how designated your driver is, not a one of you should be behind the wheel.  Ride your bike, people!

(2) Whatever NOPD asks you to do, the answer is always “Yes, officer.”  Bear in mind meter maids and cops and two very different entities.  Meter maids will just ticket you; there is little if any warning.  They’ve even been known to ticket NOPD; I’ve seen it happen.  NOPD on the other hand are working exceptionally hard at maintaining the peace and progress of parties unparalleled.  Some may say they actually excel at crowd control.  So stay out of their way.  My guess is they will only ask you once, because frankly they don’t care.  They have a job to do, and if your ladder may be to close to the street (for example), move it.  And write a column about it later.

(3) Day parades v. night parades.  Weekend night parades are easily more crowded and (ahem) more adult than the daytime ones.  Lundi Gras night however tends to be more relaxed as the weekend crowd has long disbanded (lightweights) and scuttled back home to their lives in wherever.  So for the family minded, choose daytime parades.  Your kids *might enjoy the night parades, but historically they can run late, be chilly, plus there’s always the added possibility of drunken mayhem.  I have seen blood drawn at parades.  It’s not pretty.  Put your kids’ priorities first.

(4) A ladder is not real estate.  None of the neutral ground is.  The median namesake has no owner, hence “neutral.”  You want a spot to hang with your friends?  Great.  Maintain it.  With your own actual physical presence.  None of this roping off or placing endless empty chairs “saving” a spot.  Abandon it and expect to lose it.  This is the code.

(6) Pace yourself.  I can’t stress this one enough.  Take it easy.  This is a party, not your last day on earth.  I’ve seen ambulances interrupt parades for suspected overdoses and other likely toxic ingestions.  Don’t go crazy and watch out for your people.

(7) Have an emergency plan.  It pains me to write this one, but really, do have a plan in place.  Shootings have been known to take place at parades, and when that happens it can turn into absolute mayhem.  I’ve had the good fortune of never having witnessed or be near such an event.  And I’ll be just fine if I never do.  Again, don’t go crazy, and watch out for your people.  Have a pre-determined meeting place in the event of an emergency.

(8) Mardi Gras ain’t green – yet.  Last year I caught a flat on my bike ride home down St Charles Ave on Mardi Gras eve, the victim of goodness knows what I was rolling rubber over – glass shards, bits of metal, and on.  The aftermath boasts waste of epic proportions, but you can make a difference.  Take your garbage home with you!  Practice what you preach, people!  Somehow the masses that might recycle at home leave it all on the tracks during Carnival.

(9) Language.  This ties a little into 3) but watch your mouth.  Parades are not designed for you to exercise prolific profanity.  Time and place, people, time and place.

(10) Safety first.  Stand back and enjoy the show.  Don’t rush the floats.  These are massive pieces that will crush you.  Most throws have little if any value.  Is it really worth risking life and limb?  No.  Be practical and have fun; it’s not a competition.

(11) When parking your car, do not park too close to a corner and do not block sidewalks, driveways, or hydrants.  If you question the spot you’re thinking of parking in, chances are your gut is right.  Move along.  And the no-blocking-sidewalks thing is not a joke.  Last year, not one, but two(!) of my neighbors that routinely park across the sidewalk of their own driveway were ticketed.  Their car, their house.  You can argue selective enforcement all you want, but if any car blocks any sidewalk expect the possibility of being ticketed.

(12) Lampposts are for lamps only.  And the errant set of beads.  Don’t climb up on or otherwise nest in lampposts or street signs.  Think of it as a viewing opportunity defered.  Bring a ladder like the rest of us; it’s safe and legal.

(13) Layer.  If you don’t like the weather in Louisiana, wait a minute.  You don’t know what the forecast might bring, so layer for comfort.  But also should you choose to “participate” in the time honored exchange of throws for exposure, layering may behoove.

(14) Remember the internet.  And should “participation” be your bag, imagine there must be some one or some thing near you recording either by photo, video, or live stream your very behavior.  They may even a profit from it.  Too you might want to run for office one day.  Or your kids might find it Googling your name.  Whatever the case may be, unlike Vegas, what happens during Mardi Gras in New Orleans tends to velcro the web.  And with ‘cloud’ technology now, I would imagine viral images might spread even faster.  Do you really want to be a YouTube sensation before the parade finishes rolling?  Likely not.

(15) Keep your pets at home.  Really this just goes to dogs, but if you walk your cat or your pot-bellied pig, do the masses a solid and leave Fido, Muffy, or Babe behind.  They possess zero interest in carnival shenanigans, and it’s safer for them and for you.  If you think it better to bring them if only because otherwise you might have to go home and walk or feed them, spring for boarding.

(16) Throws are for catching.  Not throwing.  Oh yes, it’s all hoots and hollers when you’re ten, unsupervised and that shiny, uncovered tuba stomps by.  Control yourself.  Whether it’s a brass band or any other target, resist the urge to show the world how unlike Drew Brees you are.

(17) Bob and weave.  Expect the unexpected.  The art of snagging prized plastic is as much about reach and technique as it is about avoiding injury.  Until you have been beaned by a set of beads, consider yourself a novice.  And it isn’t so much a rite as it is plain unavoidable given the level of airborn krewe doo.  Plastic cups not so much.  Bags of beads = bag of ice.

(18) Urination happens.  If you don’t have a pee plan, get one.  A parade outing without one is doomed to discomfort.  So grab some singles and either be ready to pay $1 here and there or buy a drink from wherever to use the plumbing.  Failing that, know people who know people who have a toilet.  The greenery along parade route gets enough abuse as it is.

(19) Be cool.  Whether bumping into your ex, that guy you fired last week (or the guy that fired you), or even Dave Matthews (true story), don’t freak out.  They weren’t expecting to see you either.  Be cordial, and be polite.  New Orleans remains the smallest big city, and everybody knows everybody else.  And keep in mind the professional and recognizable musician and film folks (read: stars) are people too.  Often with kids.  That just want to watch the parades like you.  Leave them alone.  They won’t be asking you intimate details about your job or asking to tweet a pic of you and them, so exercise the same courtesy.

(20) Surprise yourself.  Expect anything might happen during a parade; see (17).  Stash a band aid or three in your wallet or purse just because.  Bring earplugs for you and yours; between sirens and all the bands you may actually want them.  Wear sunscreen; see (13).  Drink less; see (18).  Say please and thank you more.  In other words, in surprising yourself, let carnival reveal the best of yourself whether marching, masking, or spectating.

In closing dear readers, don’t be “that guy.”  You make Mardi Gras the party it becomes; effectively your behavior – good or bad – reflects directly over us all as a city.  So keep it nice, and laissez les bon temps rouler, y’all!

7 thoughts on “Jean-Paul Villere: Revelers Without a Cause — the Top 20 Mardi Gras Do’s and Don’t’s”