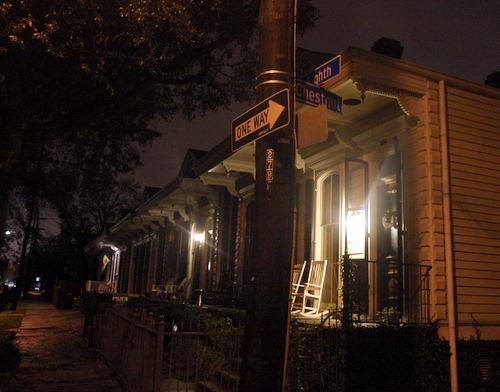 Porch lights illuminate the corner of Eighth and Chestnut, where a woman was forced out of a car after being kidnapped from the middle of the block and raped Monday night. (Robert Morris, UptownMessenger.com)

A 30-year-old New Orleans woman was kidnapped Monday evening in front of her Garden District home by three men, then beaten and raped as they drove around before letting her go and stealing her car, police and neighbors said.

The woman was in front of her home in the 1200 block of Eighth Street around 6:45 p.m. Monday when she was approached by two men, one of whom had a gun, said NOPD Officer Garry Flot, a department spokesman. They forced her into a waiting car driven by a third man, and they robbed and sexually assaulted her as they drove around, Flot said.

The men then drove back to the original location, took her keys and then stole her car, a silver 1999 Honda Accord with Louisiana license plate “OUZ 831,” Flot said. The men then forced her out of the car at the corner of Chestnut and Eighth and drove off with both cars, Flot said. She was later treated at the hospital for bruises, scratches and abrasions, Flot said.

Elizabeth Gamard, the victim’s landlord and a resident of the same block, said her teenage daughter was sitting in the front room when she heard a knock on a door, and answered it to find the woman standing there with her face bloody. When Gamard saw the woman, she reached forward to embrace her, but the woman stopped her, she said.

The block, a row of double shotguns on a smaller scale than many nearby Garden District mansions, is home to a number of single women, many neighbors said, leaving everyone shaken and upset. Gamard called the victim a good friend.

“I’m devastated. Her life will never be the same,” Gamard said. “No one, none of us would think that was possible.”

Anyone with information about the case is urged to call CrimeStoppers at 822-1111 to leave anonymous tip that could be eligible for a cash reward.