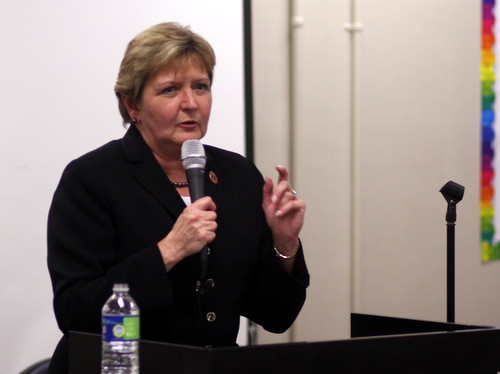 The prolonged stretches of darkness that have regularly fallen over Carrollton Avenue after sunset will soon be a thing of the past, City Councilwoman Susan Guidry told residents Monday night, reporting that the city plans to have all of the thoroughfare’s streetlights repaired within 90 days.

The lack of light on Carrollton Avenue has been a concern for at least a year — last February, Uptown-based police officers speculated that the darkness could be providing cover for a wave of armed robberies in the Carrollton area.

Some temporary lighting was installed during the Super Bowl/Mardi Gras period, City Councilwoman Susan Guidry said, and it will remain in place until permanent repairs are made. In the coming weeks, the city’s Department of Public Works will embark on a project to repair all the broken lights on Carrollton, installing new underground wiring and rebuilding circuitry where needed to get them all turned back on, Guidry said.

The project is expected to take 60 to 90 days, Guidry said department officials told her during a recent meeting. The repairs in some places are expected to be so involved that the streetcars will have to be temporarily halted to give workers room to work safely, Guidry said.

Guidry’s news about the streetlights came during a wide-ranging town-hall meeting Monday night before about 60 people. In an hour and a half, she gave rapid updates on topics including economic development, infrastructure, land use and criminal justice, and took several questions from the audience. Among other highlights:

Economic development: Costco and Mid-City Market, both on Carrollton, are slated to open this summer. Guidry still questions some of the proposals for new food-truck rules, but said a vote could come in early March.

Infrastructure: Road and drainage projects — from the major SELA drainage canals to the neighborhood-level Recovery Roads repaving program — continue all over Uptown. Her efforts to improve the Monticello canal are ongoing.

Land-use: On Jimmy’s Music Club — a topic that likely could have dominated the night, but didn’t — Guidry said she remains convinced of neighborhood-level support on the review process for new alcohol licenses created by her latest moratorium. She said she isn’t opposed to Jimmy’s reopening under that process, and when he protested that he had already waited six months for his first license application to be denied, Guidry said she was unaware he was even applying until January.

On Tulane Stadium, Guidry said she had additional questions about the negotiation between Landrieu and Tulane, but was left out of negotiations. Finally, she said the new Comprehensive Zoning Ordinance draft should be out in March, and it is planned to be approved by the end of 2013.

Criminal justice: Guidry said she still believes in the need for a federal consent decree over the NOPD, touted improvements in transparency she’s brought to the budgeting process for law-enforcement agencies and courts, and said she is optimistic about the implementation of better pretrial screening services.

13 thoughts on “All streetlights on Carrollton Avenue to be repaired in 90 days, councilwoman says”