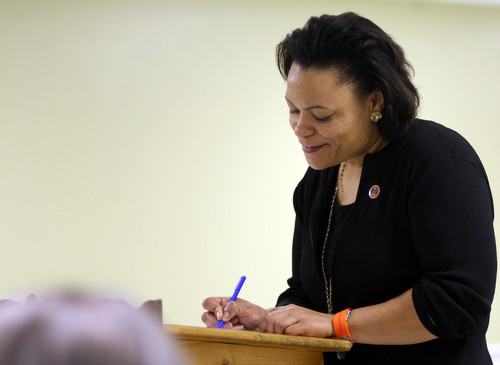 City Councilwoman LaToya Cantrell smiles as she takes notes on an issue raised by a member of the Bouligny Improvement Association on Wednesday evening. (Robert Morris, UptownMessenger.com)

The use of public space on the Mardi Gras parade routes improved slightly this year, City Councilwoman LaToya Cantrell said Wednesday night, but the city laws need to be reviewed starting now to make sure that less of the sidewalks and neutral grounds are unfairly co-opted by furniture, ropes and improperly-placed ladders.

Parade-route conduct has long been a sore spot for some New Orleanians, and the proliferation of living-room furniture and portable toilets definitely seems to have worsened in recent years, said Cantrell, whose City Council district includes almost the entirety of the Uptown route. But her direct involvement as a councilwoman began just before the parades did, when she told a Gambit reporter that she had yet to hear from her new constituents specifically about that issue.

Sure enough, she said, she began to hear from them almost immediately afterward.

“It was a call to action, and then I began to hear from you,” Cantrell told members of the Bouligny Improvement Association, which represents the area just upriver of Napoleon Avenue between Magazine and St. Charles. “By phone, by email — but it was a good thing.”

Shortly afterward, Cantrell issued a letter to NOPD Superintendent Ronal Serpas, asking for more enforcement of existing laws along the parade route. The response, widely noted and often praised, was that police on the route prevented people from setting ladders or furniture in the crosswalks.

That was a start, Cantrell said at Wednesday night’s meeting, but did not go far enough. While walking the routes (or riding them, as she did in Zulu), Cantrell said her top concern was ladders too close to the street. They are supposed to be placed back from the curb an equal distance to the height of the ladder, so that if a child falls, they won’t land in the path of an oncoming float.

She observed other problems as well, she said in a short interview after the meeting — people “roping off areas and commandeering public property, and the altercations that occur from that,” the portable toilets that spring up, or the moving trucks that park near the route for instant keg parties.

Over the coming year, Cantrell said she intends to begin convening roundtable meetings with other city officials to discuss issues such as how to empower officers to cite lawbreakers in a way that will stop the problem, or how to target the owners and the renters of portable toilets that are illegally placed. She has already broached the topic with Uptown NOPD leaders, and they support her effort but want the entire year to plan for it, she said.

“Whether we can implement this, we don’t know, but we have to start somewhere,” Cantrell said. “I think the city is gaining an appetite for enforcement, and that’s what I’m pushing for.”

Cantrell’s wide-ranging discussion with 30 or so members of the Bouligny Improvement Association included a variety of other topics, though the condition of various neighborhood streets was the most frequent issue raised. To read our live coverage of the meeting, see below.