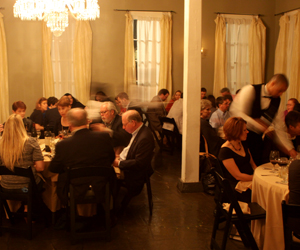 The “Gabrielle in Purgatory” dinner in February 2011 at the controversial Uptowner location on Henry Clay Avenue. (UptownMessenger.com file photo by Sabree Hill)

The latest Uptown establishments to fall under the scrutiny of the New Orleans Alcohol Beverage Control board are Grits bar on Annunciation Street and the Uptowner banquet hall on Henry Clay Avenue, and the effort to bring back Jimmy’s Music Club may also be heard by the panel Tuesday afternoon as well.

The allegations against Grits are maintaining a public nuisance and permitting illegal conduct, according to the board agenda. The Uptowner is also charged with being a nuisance, as well as with delinquent sales tax, licenses and permits.

Representatives of both establishments said they were unaware of the substance of the charges. Chef Greg Sonnier, owner of The Uptowner, said in a brief email that his attorney wasn’t even given notice of the hearing, and labeled the charge “harassment” by the city.

Grits attorney Doug Sunseri said he had been trying unsuccessfully to find out from the city what the basis is for the nuisance charge. The bar submitted a list of about 50 questions to city attorneys when the notice was received, Sunseri said, but so far has received no response.

“They’re saying we violated law, but not saying what the facts are,” Sunseri said. “You can’t prosecute us until you tell us what facts are.”

The bar has received no recent citations from the NOPD, Sunseri said. While neighbors have complained about Grits and neighboring F&M’s Patio Bar, Sunseri said those issues have been resolved, and that no neighbors appeared at the most recent community meeting mandated for the airing of any concerns.

The bar, Sunseri said, understands its responsibilities as a business in a residential area.

“On the other hand, you’ve got people who move next to an airport and start complaining about the planes,” Sunseri said.

Also on Tuesday’s agenda is an appeal by Lucky Tab LLC, the entity slated to reopen Jimmy’s Music Club on Willow Street in west Carrollton, of the city’s denial of an alcohol permit. Attorney Michael Tifft said in an email that he plans to challenge the legality of the moratorium on new alcohol licenses in the Carrollton area.

The docket also includes a nuisance allegation against the Chippewa Food Store, 1684 Chippewa, in the Irish Channel.

The meeting will begin at 1 p.m. Tuesday in City Council chambers. The docket includes 12 items from around the city, and it is not clear which, if any, will be heard on Tuesday or postponed until a later date.