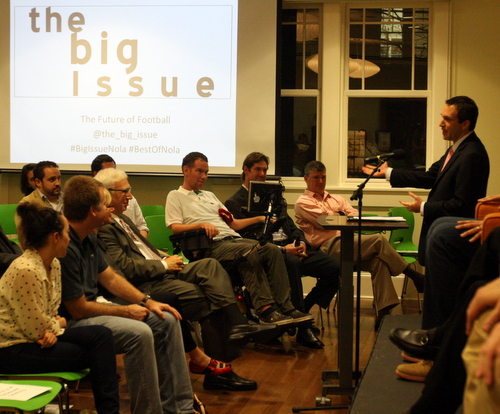 Public concern about the long-term risks of football on young children — including that expressed by President Obama this week — may ultimately represent the biggest threat to the future of the nation’s most popular pasttime, former Saints player Steve Gleason said during a panel discussion on the issue Tuesday night.

Until very recently, it would not have been uncommon for a 6-year-old boy to dream of growing up to be like San Diego Hall of Fame linebacker Junior Seau, Gleason said. But after Seau committed suicide last year — and was subsequently discovered to have signs of a depression-causing degenerative brain disease linked to repetitive head injuries — children may now be starting to decide they don’t want to be like NFL players, Gleason said. When the President of the United States speculates that if he had a son, he might not want him to play football, that’s one more major step in that direction, Gleason said.

“Now, that kid — and his parents — do not want to grow up to be like Junior. As a result, the talent pool is diminished, and the game slowly becomes less relevant,” said Gleason, who is also battling ALS. “Obama, with his hypothetical comment, in his own way diminished the hypothetical talent pool, which is the greatest asset the NFL has.”

Gleason’s comments came Tuesday night during a forum about “The Future of Football,” part of a series of panel discussions about current affairs called “The Big Issue,” hosted by New Orleans Hillel at Tulane University. Although Gleason was not a panelist, he and former teammate Scott Fujita sat in the front row of the audience, and the legal experts and sports journalists leading the discussion made frequent reference to them.

A preliminary discussion established a common thinking among the panelists that the harsh suspensions visited on the Saints this past season for allegations of paying players to hurt specific opponents had less to do with the actions of the Saints themselves, and more to do with a growing concern about how the issue of repetitive head injuries will impact the country’s most lucrative form of entertainment. Those issues now have many people wondering about the ethics of even watching such a potentially harmful activity as a form of entertainment, noted moderator Gabe Feldman, a Tulane sports-law professor.

Thousands of players are already suing the NFL over issues related to brain injuries, and the league is quickly instituting new policies in response. But new technology and better doctors may not be enough, said NPR reporter Mike Pesca — more than a million teenage boys play football in high school, and the assets of the NFL will never reach them. As knowledge continues to spread about the long-term damage caused by shaking of the brain during football, more and more families may simply decide to play other sports.

“The ultimate question is that we have an inherently violent game that we’re trying to de-violence,” said fellow panelist Andrew Brandt, a sports-law professor at Villanova and ESPN analyst. “How much do we try to take out the violence, and affect the game that we love to watch?”

The seriousness of the concussion issue is only now becoming clear to everyone involved, Fujita said — from Commissioner Roger Goodell down to individual players like himself.

“This is a huge culture change we’re going through, and we’re all trying to navigate it as best we can,” Fujita says. “What the future holds, I really don’t know.”

The hour-and-a-half long discussion included numerous other issues, such as individual changes coming to pro football, the players’ union’s role and responsibilities, the role of referees and testing for performance-enhancing drugs. Watch the discussion in its entirety in the following video, or review our live coverage from the room.

One thought on “Steve Gleason: Obama’s comments about football may keep kids from playing”