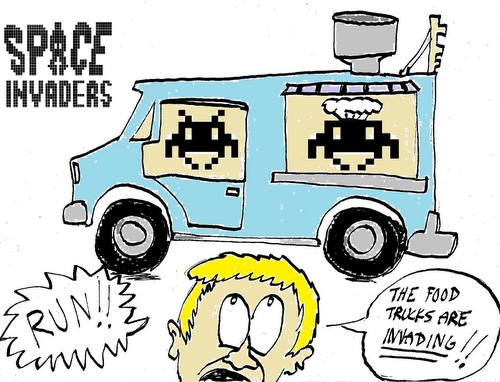 The food truck debate in New Orleans is stirring once again.  City Councilwoman Stacy Head has floated legislation to loosen regulations of food trucks, which at present are largely unchanged from the 1950’s. These existing regulations make food truck operations a nearly impossible proposition, with draconian restrictions on permits, operating times and locations.

Head wants to revamp and modernize these rules.  Food trucks would be redefined under the city code to allow on-vehicle cooking.  Instead of barring food trucks from operating 600 feet from restaurants, Head proposes reducing this restriction to 50 feet.  Instead of only issuing 100 food truck permits, Head proposes increasing the number to 200. Food trucks would be able to park continuously for four hours and would be able to operate in previously banned parts of the Central Business District (CBD).

Of course, with the loosening of operating rules comes some responsibility.  Thus, Head also proposes to increase permitting fees, create regulations for the suspension and revocation of permits, and pass rules requiring food trucks to clean up trash and keep clear from the front of residences.  Essentially, food trucks would have a roadmap to safe and legal operation.

Who could oppose this?  In true modern fashion, an on-line petition has already been started on Change.org.  Local restaurateur Ruben Laws III started the petition last week in which he hysterically opined that “[r]estaurant owners in the CBD are about to have their sales invaded on by the food truck industry” even though they “have made great investments in their product and have worked hard to build a following of customers in their area.”

This is clearly the language of rent-seeking.  No business owner is entitled to legal protection for their market share. Food trucks can’t “invade” anybody’s sales because those sales were never the anybody’s property to begin with.  If the public responds to the availability of food trucks by abandoning certain restaurants, then perhaps those restaurants were not working as hard as they thought.  Perhaps they’ve just been capitalizing off of laws to restrict their competition rather than serving the customer.

Frankly, I used to work in the CBD, and I never felt there was a surfeit of food options, and those that did exist often struck me as more complacent (re: poorer) than in other parts of the city.  My impression was that an average restaurant in the CBD can limp along on lunch sales.  Accordingly, the consumer would certainly benefit from more diverse food options that food trucks would provide.

As of writing this, Laws’ petition has 278 signatures.  On the other hand, a previous petition by the New Orleans Food Truck Coalition for liberalizing food truck laws garnered over 1,300 signatures.  This is obviously not a scientific sampling, but I wouldn’t be shocked if it reflected the actual breakdown of New Orleanians.  Food trucks have been largely welcomed with open arms.

Some wise person once said: “If you love something, set it free. If it comes back it’s yours to keep. If it doesn’t, it was never meant to be.”  This quote is usually invoked in reference to romantic relationships and not commercial transactions, but the same sentiment applies.  The false perception of being trapped does not bring genuine fulfillment to anyone.  CBD restaurants that truly value their customers should set them free and let them experience food trucks.  If those customers don’t return, they were never really their customers to begin with.