I may make some controversial statements in this column, but this is not one of them: Drinking is a well-established part of New Orleans culture.

Frederick Law Olmsted, the legendary travel writer and landscape architect who designed New York’s Central Park (and whose firm later designed Audubon Park) once wrote that “light wines were drunk much more extensively in Louisiana than anywhere else in the United States,  to such an extent, indeed, that among the Creoles and more prosperous Americans claret was the common breakfast drink.”

Bishop Henry Whipple, the first Episcopal Bishop of Minnesota, took a darker take from his visit to New Orleans in 1844.  “Drinking is an awful vice here,” he wrote in his journal. 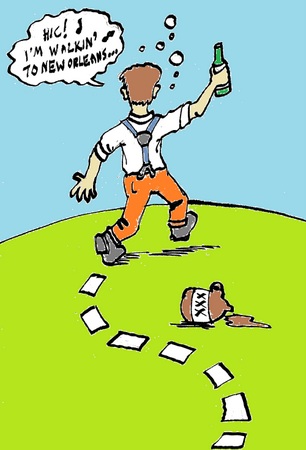 Today, New Orleans retains its reputation has a haven for drunken debauchery, a point driven home during Carnival Season.  This encompassed by food writer Alan Richman’s now-notorious 2006 GQ article about New Orleans, in which he stated his belief that our “morning exercise regimen consists of stumbling out of bars.”

Given all of this, you might think that New Orleans would rank highly on lists of the most drunken cities in America.  In fact, the opposite is true.  Four magazines – Forbes, Men’s Health, The Daily Beast and US News and World Report – all have published lists of America’s most blotto cities.  New Orleans wasn’t on the top 10 of any of their lists.

This is not to say that New Orleans doesn’t probably have an above-average rate of alcohol consumption, but we’re clearly not a city of drunks.  We’re also not a city of teetotalers.  I don’t know about you, but I wouldn’t have it any other way.

In any event, we should not be so quick to think of drinking as “an awful vice” as Bishop Whipple did.  Obviously some people become aggressive while drinking to excess, and become a danger to themselves or others.  Others hop behind the wheel, often on a regular basis, posing a risk to others on the road.  However, the vast majority of drinkers aren’t running down pedestrians or getting in bar fights.  Most people are capable of drinking responsibly (with some exceptions).

America has, thankfully, abandoned the temperance movement since prohibition failed miserably.  We’ve even started to view alcohol as having potential health benefits.  A little bit helps prevent strokes.  It can help stave off colds.  And heck, smart people are doing it!  According to research performed by Dr. Satoshi Kanazawa, a psychology reader at the London School of Economics, “more intelligent people drink more alcohol than less intelligent people.”

Of course, binge drinking and excessive drinking are hazardous, and New Orleans is famous for them.  People who come to New Orleans are often shocked that we have bars where there is no “last call,” because we have bars that never close.  And don’t try to kick us out, either.  When a popular all-night bar on Magazine Street caught fire on in 2007, some bar patrons were reluctant to leave and resisted attempts by fire officials to remove them for their own safety (on a Monday night, no less).  Few people, upon hearing this, were shocked.

Still, although we may love our liquor, we aren’t constantly drowning our sorrows and inexorably killing our livers.  Mardi Gras is not a celebration where people drink themselves silly to escape their own problems and those of the wider community.  We have our problems, but we’re more than a collection of drunken reprobates.

This Mardi Gras, let’s celebrate our progress, our culture, and of course, our liquor.  And let’s do it all while “drinking responsibly.”

3 thoughts on “Owen Courreges: A toast to our great drinkers”