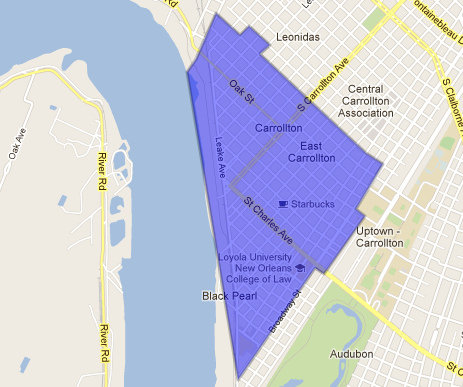 A map of the proposed moratorium on new alcohol sales in Carrollton. (map by Robert Morris, via maps.google.com)

A moratorium that requires any business in the Carrollton area that wishes to serve alcohol to get specific permission from the city could continue, based on a proposal before the New Orleans City Council this week.

The current moratorium has been in place for two years, but does not ban alcohol sales outright in Carrollton — many new restaurants have successfully opened with alcohol sales in that time, such as Tru Burger and the upcoming Mellow Mushroom on Oak Street, or Kakkoii and Singha Song on Maple. But the moratorium does require such businesses to formally request a waiver from the City Council — even if their zoning would normally allow it — which often involves working out a good-neighbor agreement on operating hours and other issues with the surrounding neighborhood associations.

“It’s not a total ban on it,” said Kelly Butler, special projects director in Guidry’s office. “It’s just a chance for the City Planning staff to look at it, for City Council look at it, and for neighbors to have input.” 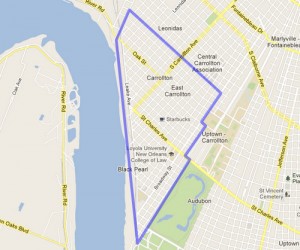 The boundaries of the previous moratorium reached one block farther north to Birch and two blocks over to Audubon Park. (map provided by City Councilwoman Susan Guidry’s office).

Because the current moratorium has reached its maximum life of two years, it cannot be renewed. Thus, after seeking input from the Carrollton neighborhoods, Councilwoman Susan Guidry’s office has altered the moratorium boundaries. The map retains its basic triangular shape along the Riverbend, encompassing Maple, Oak, Carrollton, Broadway and Willow Streets, but trims off some neighborhoods along the northern and eastern edges that do not have commercially-zoned properties and thus do not need the moratorium, Butler said.

The new moratorium runs roughly along Jeanette and Broadway Streets to make a triangle with the river, with a few additional blocks.

“We tightened up the boundaries,” Butler said. “It’s smaller than what it used to be.”

Some neighborhood groups had suggested expanding the boundaries up to Claiborne Avenue, Butler noted, but said the office decided not to do that without holding a broader conversation with residents.

The moratorium is truly intended to be a temporary instrument, Butler said, until the new Comprehensive Zoning Ordinance can address the neighborhoods’ wishes more directly.

“We’re all just waiting for the new zoning ordinance, but we wanted to answer call from neighborhoods to see some sort of gap measure put in place,” Butler said.

The new moratorium has already found one opponent in the new operators of Jimmy’s Music Club on Willow Street. Mike Tifft, an attorney for the club, appeared before the city’s Alcohol Beverage Control board last week to call the moratorium’s application to license renewals an “unconstitutional taking.”

Guidry’s office is still researching the specific case of Jimmy’s, Butler said. If the club was closed for six months, the property may have lost its permission to sell alcohol regardless of the moratorium. If so, the club may need a complete change of its zoning, Butler said.