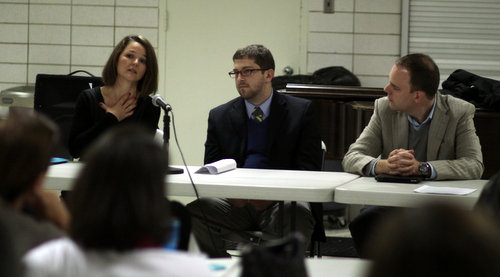 A team of three officials sent by the state’s top educator told a large group of Lycée Français de la Nouvelle Orléans parents Monday night that their concerns about the school’s leadership have been heard, and that they intend to forge a plan to correct the problems and prevent them from being repeated.

Although many parents noted that they have been sharply divided over those issues, both sides expressed optimism about the arrival of the outside help. Several major questions remain, however, such as whether the cavalry has arrived soon enough to prevent any further damage to the school, and what ultimate authority the team’s recommendations will have.

Caroline Roemer Shirley, leader of the Louisiana Association of Public Charter Schools, said that Lycee’s issues have been a source of frequent discussion at the state level, particularly between her and state Superintendent John White. While parents generally seem satisfied with the classroom instruction and the school’s finances seem to be recovering from a deficit at the end of last year, Roemer Shirley said that frequent complaints about the school’s governance have attracted the attention of the state.

“The governance side has some areas that still need to be improved,” said Raphael Gang, chief of staff of the state Department of Education Office of Portfolio, which oversees charter schools.

Roemer Shirley’s association, which advocates for charter schools in Louisiana, had independently determined that one gap in the state’s public education framework was support and training for charter school boards, and was developing a program to address that. With that in mind, she and White decided upon a grant to hire an outside consultant, Jeremy Hunnewell of EMH Strategies, to work specifically with Lycee on its leadership.

That process will have several steps that could take roughly three months, Hunnewell explained. First, he plans on speaking to parents on all sides of the issue, board members, teachers (confidentially if needed) and anyone else about what Lycee’s problems are and how to solve them. Part of his job will be developing a process to select the school’s next CEO, but he will also simultaneously be making recommendations on how to correct issues with the school’s governing structure, he said.

“My goal is to help identify the best CEO possible for this school. Along the way, I know we’re going to find a lot of other things that need to be improved,” Hunnewell said. “My focus is going to be the school leader, but I’m not going to turn a blind eye to everyone else.”

Speaking for about an hour while the Lycee board was meeting privately about a lawsuit filed by a fired special-education coordinator, the team from the state did not mince words about the school’s current situation. Some board members have been too involved with the school’s daily operations and its faculty, performing tasks that should have been left to the school leader, they said. As they look at the skills represented on the board, one recommendation they may make is for some members to “roll off” the board, Roemer Shirley said.

And, if the process fails and leadership issues persist at the school, state officials may ultimately decide to take away Lycee’s charter, she said.

“You are facing revocation for this school,” Roemer Shirley said. “There is the potential that you may not be able to be in this school anymore.”

That potential, however, represents the most extreme action the state could take, Gang stressed. In addition to what appear to be positive strides in academics and finances (the school received a clean audit Monday night), Lycee should be commended for its strong parental involvement, Gang said — evidenced in part by how strongly they disagree over the school’s direction.

For the most part, the audience of 100 people (including those who sent a letter to the state late last week asking for the removal of two board members and those who responded this week with a letter touting the school’s progress and calling the first group “misguided”) seemed receptive to the new arrivals — most who spoke or asked questions began their comments by thanking them for appearing.

One parent, Robert Rachal, said he was among the parents who signed the grievance letter against the board precisely in hopes of getting such a conversation started. Although the board members themselves did not discuss that letter at Monday’s meeting, Rachal said it might be better that way — aggrieved parents may prefer to talk the issues out with the new arrivals.

“If we’ve got this other process in place, it may be a better, more effective way to get a solution,” Rachal said after the meeting.

Jeff Teague, treasurer of the school’s parent-teacher organization, said he was optimistic about the way parents on both sides of the issue reacted to the team from the state.

“What I saw was a lot of individuals who are really excited about having this support,” Teague said. “A disinterested third party may be able to help us all come to the table. We need somebody to help us mediate all these ideas.”

Several speakers, however, expressed concern that neither the current board, nor the state team, fully recognizes the importance of the French curriculum to many parents. That was their reason for choosing the school — the prospect of their child graduating with a French diploma — and both they and the teachers deserved to have that promise fulfilled, they said. State officials replied that they were aware of this concern.

Others worried that the intervention may be coming too late to save some teachers. Some of the French teachers have looming decisions about whether to renew their visas and may not be able to wait three months, a few parents pointed out. Hunnewell said that he has already begun gathering information, and that he may be able to make some recommendations sooner.

Finally, the team’s authority over the school appeared to be a sort of gray area. It is the first time the LAPCS has partnered with the state to do such “crisis work,” Roemer Shirley said, and they haven’t determined what the formal arrangement will be between the team and the existing school board.

[Note: This article was first posted at 6:30 p.m. Monday with live coverage, updated shortly after midnight with the summary of the meeting, and updated again just before 1 p.m. Tuesday to include the “Lycee progress” letter that was received Tuesday morning.]