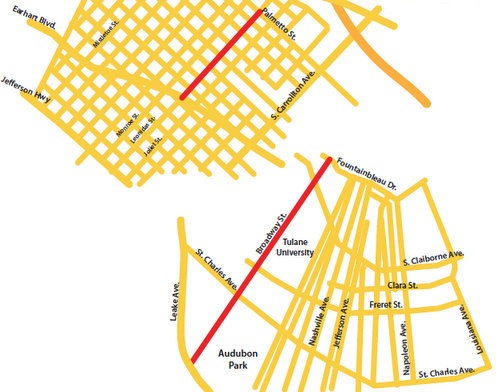 Map of the sections of Broadway and Leonidas set to be repaved starting in the next few weeks — not to scale. (Map via pavinglaroads.com) 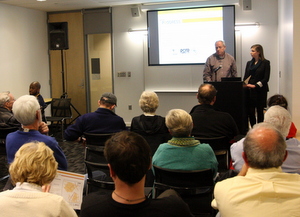 A $5.6 million project to repave two miles of Broadway Street through the university area and half-mile segment of Leonidas in Hollygrove will start in the next few weeks, but residents who attended an informational session about the project Thursday night were skeptical that the new surfaces will last long as old pipes continue to crumble underneath.

The Broadway portion of the project runs from Fontainebleau Drive down to Leake Avenue along the river, and the Leonidas segment runs between Earhart Boulevard and Palmetto Street. The work — completely paid for by federal tax dollars, not by the city — will begin by repairing curbs and installing handicap ramps on sidewalks, then patch any collapsed portions of the roads, and finally replace the old asphalt with a new surface, said project manager Rick Hathaway and spokeswoman Alex Wommack of HNTB Corp. to a group of nearly 50 residents gathered in a Tulane University conference room.

Construction is set to begin in February or March, and will last until the fall — a more specific date will be made available after construction begins, the project officials said. One lane of traffic will remain open in each direction at all times, but on-street parking will be restricted where the work is taking place. The project will follow the same model as a recent repaving of Carrollton Avenue, except that no bike lanes will be added.

Many of the residents said they will be glad for a smoother road, but questioned how long the work will last, given the frequent breaks in the ancient water pipes underneath that cause sinkholes. Hathaway — stressing that he and his team are “all New Orleanians too” and understand those frustration, said the street repaving is being coordinated with city agencies such as the Department of Public Works and the Sewerage and Water Board.

Water line repairs are scheduled at three locations between St. Charles and Claiborne prior to the repaving project, Hathaway said, and any other collapsed drains or other issues the repaving workers discover will be reported, Hathaway said.

“It will be brought to the appropriate agency’s attention,” Hathaway said.

The intent of Thursday’s meeting, Hathaway answered, was to get the basic information about the repaving project out to the public. For a more comprehensive meeting about those issues, Hathaway suggested residents contact their City Council member.

Another audience member asked if Broadway residents could help replace some of the street-name tiles that have been lost over the years while the sidewalks are being worked on anyway, and Hathaway said that the project is not authorized to do that. Magazine Street residents, however, made a similar arrangement with the Department of Public Works recently when their street was repaved, and Hathaway suggested that the Broadway residents might be able to do the same.

To read our complete coverage of the question-and-answer session, see below.