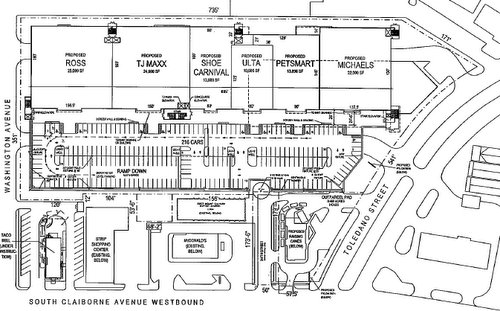 A site plan for Magnolia Marketplace, as submitted to the City Planning Commission.

If you thought the new Taco Bell on South Claiborne was exciting news for Uptown New Orleans, just wait till you meet its new neighbors.

If Tuesday afternoon’s approval by the City Planning Commission is any indication, a major new shopping center called Magnolia Marketplace is soon headed for the large open area just off South Claiborne Avenue adjacent to the Harmony Oaks development.

At two stories and 156,000 square feet, the project is actually larger than the Costco store being developed on Carrollton Avenue, though plans submitted to the City Planning Commission show it divided among six tenants. The businesses listed on the plans are Ross, TJ Maxx, Shoe Carnival, Ulta, Pet Smart and Michael’s, although the status of negotiations with each of those tenants was not detailed. The main retail building stretches from Toledano to Washington, in the center of the block between Clara and South Claiborne, with a two level parking garage in front of it.

The project will also feature a Raising Cane’s fried-chicken joint in a separate building at the corner of Toledano and Claiborne, which would join McDonald’s and the forthcoming Taco Bell in the block. Although the area is zoned residential because of its past inclusion in the former C.J. Peete housing development, the new Harmony Oaks development has a smaller footprint, and this front portion was generally envisioned for commercial development, officials said.

With a 73-page report compiled by the City Planning Commission staff, the developers spent little time during Tuesday afternoon’s hearing discussing their retail offerings. Instead, they took issue with some of the changes recommended by the city planning staff and countered strong opposition from leaders of a church that will be completely surrounded by the development.

Specifically, developers with JCH Development, Stirling Properties and Mathes Brierre architects said they needed setbacks from South Claiborne and signage sized similarly to the McDonald’s. City staff members replied that the McDonald’s was built before current zoning rules intended to encourage pedestrian activity, and that the traffic and parking combination requested by the developers is a suburban style that would make walking to the development unsafe.

The City Planning staff is also recommending that the project dramatically reduce its parking, from 484 spaces planned to 313. The area freed up could be used for landscaping and stormwater retention, the staff said, noting in response to one Planning Commissioner’s question that multi-level parking is uncommon for retail developments in the city.

Architect Ed Mathes urged the commission to consider the needs of the retail tenants, arguing that the only way to attract retail back into the city is to allow the signage, parking and other amenities the retailers need.

The First Mount Calvary Baptist Church is already somewhat landlocked behind the McDonald’s, accessible by a short strip of Sixth Street. (image via Google maps)

The project drew sharp opposition from the leaders of the First Mount Cavalry Baptist Church. Pastor Ulysses Landry took particular issue with the idea of closing the small section of Sixth Street that comes off South Claiborne, an idea the developers said they had originally considered but abandoned, though they had not shared that with the church.

“If Sixth Street is closed, the church is dead. It has no access. It has no ability to grow,” said church attorney Gilbert Stampley. He later added, “You would effectively kill one entity that’s 100 years old and create one yet unborn.”

“I don’t think anyone understands what’s going to happen in front of the church,” agreed church member R.D. Morris.

Tara Hernandez of JCH Development replied that the church members had stopped meeting with the developers, and said the developers had been willing to create access to the church through the shopping center parking lot and to allow the congregation to park in their garage. Planning staffers said they were aware that the development no longer proposes to close that portion of Sixth Street.

Planning Commission George Amedee, however, said he was troubled by the breakdown in communication, and recommended postponing a vote on the issue until January to give the church, the developers and the city staff time to meet all together.

“Both sides could benefit from further discussion,” Amedee said.

Amedee’s motion got only four votes, one shy of passing, however. A second vote, to recommend in favor of the project as modified by the planning staff’s recommendations, then passed 5-1, with Amedee the dissenting vote.

The rezoning request next proceeds to the full City Council for final approval.

An aerial view of the project as included in the City Planning Commission report.

For video of the discussion of the project, see below: