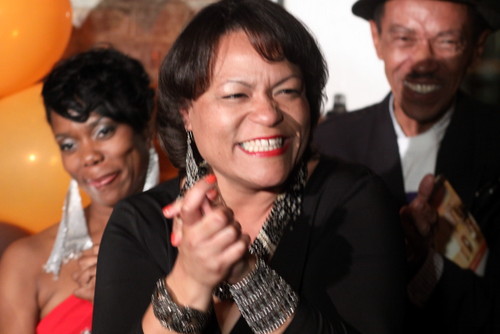 LaToya Cantrell laughs and claps as she arrives at her victory party at Dijon restaurant on Annunciation Street. (Robert Morris, UptownMessenger.com) 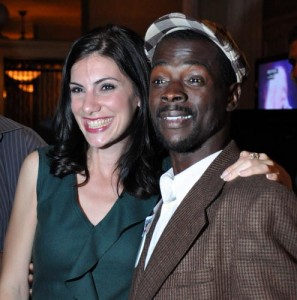 Dana Kaplan poses for a photo with a supporter at her election-night party at Wolfe’s. (photo by Marta Jewson for UptownMessenger.com)

LaToya Cantrell, the Broadmoor activist whose neighborhood’s recovery became a symbol of New Orleanians’ resilience, pledged to bring her tireless work ethic and open heart to a bigger stage Saturday night after winning a seat on the New Orleans City Council.

Cantrell won nearly 54 percent of the ballots cast Saturday with all precincts and early votes counted, according to the Secretary of State. Her opponent, Dana Kaplan, won just over 46 percent.

Following former District B Councilwoman Stacy Head’s election to the At-Large seat on the council, Cantrell will serve the remainder of Head’s unexpired term until the spring of 2014. She said her first priority will be setting concrete goals for progress in each of the neighborhoods in District B.

“I want to set some real expectations for what we can accomplish in 15 months,” Cantrell said. “I do want to be able to show results in a short time. That’s going to be critical.”

Kaplan, meanwhile, offered her congratulations to Cantrell in an address to supporters Saturday evening.

“We know that if she succeeds, our city succeeds,” Kaplan said.

Further, Kaplan pledged to continue her work at the Juvenile Justice Project of Louisiana and in her own neighborhood, the Irish Channel, in an effort to move the city forward.

“All of us want what is best for the city,” Kaplan said regarding herself and her opponents.

Eric Strachan, who ran third in the Nov. 6 primary for the District B seat and subsequently endorsed Cantrell, was stood with her and Head at the podium as Cantrell gave her victory speech. Afterward, Strachan said he has been too focused on helping Cantrell through the runoff to focus on his own plans for the future.

A veteran worker on several campaigns at the age of 31, Strachan said running a campaign himself was a difficult learning experience, but one he’d do all over again even knowing the end result.

“It was a hard experience, but one I think will serve me well,” Strachan said.

The fourth candidate for the District B seat, Marlon “Buck” Horton, stood with Kaplan during her remarks and then dropped by Cantrell’s victory party to congratulate her. He said he was looking forward to getting back to his career as a restaurant owner and bounce artist.

“It’s all good. I’m excited for her,” Horton said of Cantrell. “And I think I served my purpose.”

Although Cantrell was rumored as a frontrunner for the seat from soon after Head’s election, campaign finance reports suggest that Kaplan had at least $90,000 more than Cantrell did to spend in the final three weeks of the race. Cantrell campaign manager Maggie Carroll said that feeling of being the underdog was a familiar one to the team of Broadmoor residents working to get Cantrell elected.

To read live coverage of Election Night from UptownMessenger, see the box below.

One thought on “LaToya Cantrell wins runoff for District B seat”