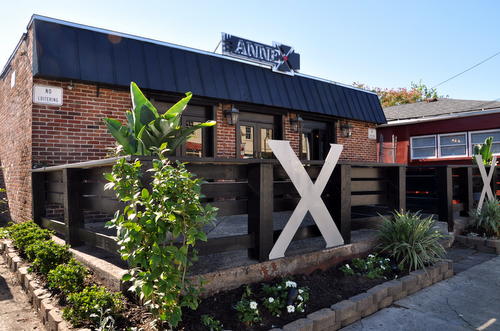 TJ Quills has transformed into “Annex,” after a visit from a cable TV reality show. (photo by Marta Jewson for UptownMessenger.com)

TJ Quills has a new owner, a new look, a new name — essentially, a complete overhaul of the Maple Streeet bar, thanks to Bar Rescue, a reality show on SPIKE TV.

Following underage drinking allegations last year, TJ Quills’ previous owner signed a set of strict operating agreements then sold the property to Darian Blanchard in April. Blanchard said he didn’t know about the issues when he bought it, but after an appearance before the city alcohol board, he said he has been working with the neighborhood in good faith to turn the bar around.

As part of that effort, Blanchard put in an application for the Bar Rescue show and was one of a handful of bars selected for renovation. Blanchard was notified a few days before film crews arrived on Oct. 30, and the bar closed for a few days before its grand re-opening as Annex on Nov. 6.

Blanchard said the line to get in stretched down the block that night.

With the new name Annex, Blanchard’s bar was renovated by the reality show in less than a week. Freshly painted walls are graced with new artwork and spot lighting. New high top tables have touch screens built-in so customers can order food from their seat. The bar has a new ventilation system designed to remove cigarette smoke by cleaning the air 13 times per hour.

“The two things that Jon Taffer said were, we were all good bar tenders and quick, and that the bar wasn’t dirty, but that everything else needed to be improved,” Luquette said. 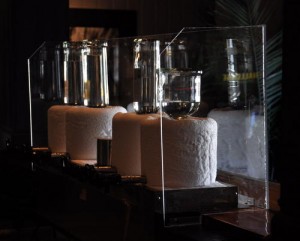 A row of new vodka chillers at Annex. (photo by Marta Jewson for UptownMessenger.com)

Luquette said bartenders were trained in how to make new drinks with fresh ingredients. Chef Brian Duffy came in and created a new menu. Complete with a TurboChef oven, the staff can cook anything in about two minutes said Luquette, adding there was about $100,000 worth of work total was done.

“We’re trying our best to improve the quality of life in the neighborhood,” said Blanchard.

He said he hopes to attract more of a neighborhood crowd, and doesn’t want to be known solely as a college scene.

“There are still a few things to improve, like the parking lot, so we hope to make money and keep investing in the property,” said Blanchard.

Keith Hardie of Maple Area Residents, Inc. — which often opposes any new alcohol licenses on Maple — was circumspect when asked for comment on changes at the bar.

“MARI continues to be concerned about the number of ABOs in Carrollton, which already has more ABOs than any area of the City other than the French Quarter, and particularly concerned about this location, which has previously been sanctioned by the City for serving alcohol to under-aged patrons,” Hardie wrote in an email. “We hope that the future will bring a broader range of businesses to Maple Street.”

Annex opens at 7 p.m. everyday, except Thursday when it opens at 5 p.m. Blanchard said he is currently obtaining permits to open the kitchen. The show airs in mid-February.

“[Taffer] made us realize all the potential we had and it’s been the greatest thing in the entire world,” Luquette said.