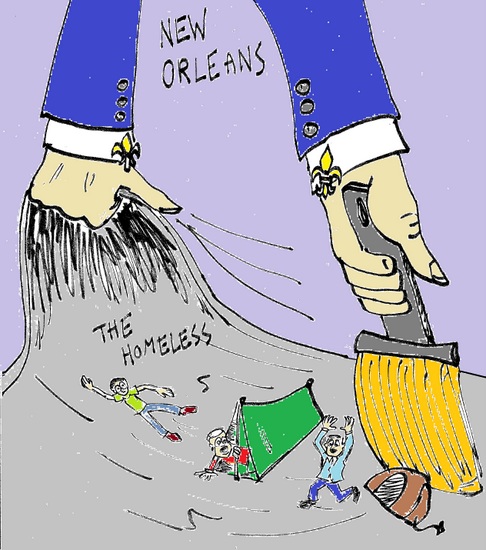 The Pontchartrain Expressway homeless encampment is no more.  This past Friday morning, police swept the remaining homeless people from the encampment in the underpass that separates the Central Business District from Uptown New Orleans.  The number of persons removed was 55 persons by the city’s count, but closer to 100 according to the New Orleans Mission, which adjoins the expressway.  By either count, it was a significant encampment.

Ironically, the night before Covenant House, a local homeless shelter, held a “Sleep Out” event in which 40 local leaders slept on the sidewalks adjoining the shelter in a symbolic show of sympathy with the plight of the homeless.

Now, these two events may seem incongruous at first blush, but really they were not (even if the timing was intentional).  I gripe at a lot of things the city does, but in this case the sweep was announced in advance and the city worked to increase the number of homeless beds to accommodate those being forced out of the Pontchartrain Expressway encampment.

For example, the city worked with the New Orleans Mission to increase its number of beds from 165 to 252, and the city met with the heads of other shelters this past Monday to coordinate the influx of homeless persons being ordered out.

Moreover, I wholeheartedly agree with the city that any longstanding homeless encampment is not only a misuse of public lands, but a potential health hazard.  Without plumbing facilities, what was basically a concrete parking lot was presumably awash in human waste.  Leaving the homeless to that squalor is not an act of mercy, but one of callous indifference.

However, the timing of all of this, really, really bothers me.

First, you have the timing of the “Sleep Out” being the night before the “sweep out” of a homeless encampment.  Superficially, it looks like somebody trying to crib off of good press for public officials sympathizing with the homeless.

Secondly, there’s the issue of Super Bowl XLVII, to be held on February 3, 2013 in New Orleans, less than three months from now.  Curiously, the expressway encampment had been there for several months, and yet just now that the Super Bowl looms, the city decided to get rid of it.  Astute readers will also recall that my previous column concerned a proposed ordinance to provide for “closing times” for Jackson Square at night, ostensibly intended to remove the homeless who sleep there in advance of Super Bowl crowds .  Call me crazy, but there seems to be a theme here.

My concern really isn’t over the idea that the homeless aren’t able to create potentially unsanitary encampments by occupying public land.  I don’t want that.  Rather, my concern (aside from the use of unconstitutional laws like the Jackson Square ordinance) is that the City is just whitewashing the problem and doesn’t intend to make any long-term commitment to the homeless problem in this city.  As a matter of public policy, I want the city to do more than look pretty for the Super Bowl.

Earlier this year, a study by the National Alliance to End Homelessness found New Orleans has a rate of homelessness that is three times the national average and the second highest in the nation.  Alas, we usually don’t notice the severity of the problem because the homeless largely retreat to our massive surplus of abandoned and blighted housing.  The problem is still there behind the moldy walls and underneath the leaking ceilings.  Regrettably, it seems like we only want to deal with it when it stands starkly in plain view, as with the Pontchartrain Expressway encampment.

I’m not saying that there are easy or cheap solutions, or that we need to be spending more scarce funds on those who often fail to help themselves.  However, assistance to the homeless should be earnest.  It should not be a pretext for creating a false image for the Super Bowl.  Any effort we give now should be a sustained endeavor that reflects our collective dedication, not our vanity.

Time will tell if that is the case.

15 thoughts on “Owen Courreges: Do we have a homelessness strategy, or just a Super Bowl punt?”