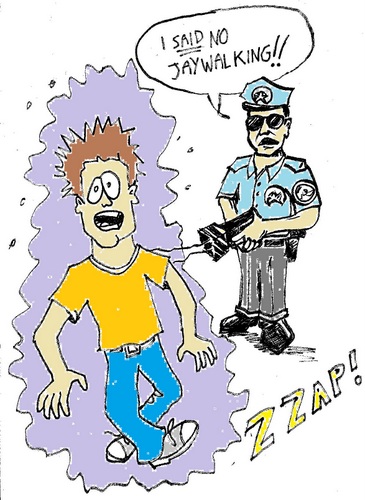 Sometimes, however, even good reforms can be a mixed bag.

When used properly on a healthy individual, a Taser smarts like crazy but doesn’t actually cause any major injury by itself.  Pepper spray, on the other hand, is likely to cause injury to the eye if sprayed for more than a couple of seconds.  A Taser is also faster acting, which is useful when dealing with a violent suspect.

Then again, perhaps “smarts like crazy” is a bit of an understatement.  If you check YouTube, you can see a couple of videos of NOPD officers undergoing Taser training, or at least the part where they get to experience what it’s like to be on the receiving end.  The officers scream loudly in intense pain as their bodies contort and twitch.

Of course, there’s also the problem that not every individual is healthy, and the unrestrained or repeated use of Tasers can cause serious injury or death.  At the extreme end, there are cases where officers have used multiple Taser bursts on a suspect with serious heart problems, and the Taser appears to have been a contributing cause of the suspect’s death.

Still, any use of a Taser has to be placed in proper context.  When the clear alternative to using a Taser is a fistfight with police, the issue of a brawler’s weak ticker seems moot.  On the other hand, when the officer simply faces somebody who passively refuses to obey a lawful police order, the potential harm to the suspect (not to mention the severe pain inflicted) becomes a far greater consideration.

With this in mind, the federal consent decree requires that NOPD officers only use Tasers “when such force is necessary to protect the officer, the subject, or another party from physical harm, and other less intrusive means would be ineffective.”  The NOPD is also supposed to adopt training and guidelines regarding the use of repeated bursts.

The real question then becomes exactly what guidelines this will produce, and whether officers will follow them.  The thing about Tasers is that they’re easy to use as a compliance device.  If somebody won’t do what an officer wants, they can be Tasered until they go limp, then handcuffed and thrown in a squad car – no fuss, no muss.  In short, compliance at the push of a button.

Accordingly, many people, myself included, worry that the use of a Taser device will actually encourage officers to default to using a Taser, including in situations where minimal or no force is required, or where the officer should have called for backup.  Moreover, the fact that the Taser is readily available may encourage officers to be more aggressive and mishandle encounters with citizens.  If at the end of the day you might have to physically restrain somebody, you’ll be more likely to avoid letting it get to that.

For example, a tricky scenario that has been repeatedly seen in the news is where a suspect is stopped for a traffic violation and subsequently ordered out of the vehicle.  There have been cases where an officer will use a Taser on a suspect who simply refuses an order to leave a vehicle.  In other jurisdictions, the suspect will be Tased only if they hang on to the steering wheel or otherwise resist efforts to pull them out. Finally, in the most restrictive jurisdictions the officer will only use a Taser in response to physical violence on the part of the suspect, threatened or actual.

Most people agree that passive resistance does not merit the use of a Taser.  If a suspect is simply walking away when ordered not to, it isn’t time to give them a jolt.  Likewise, if a suspect is angry and noncompliant because the officer was loud, rude and impatient, they’re probably not the party who could use a shock to the system.  Likewise, where the suspect offers aggressive resistance, it’s probably foregone conclusion that they would be better off getting Tased than clubbed into submission.

The tricky part comes with the middle ground of the continuum – active resistance.  The consent decree seems to indicate that active resistance does not merit the use of a Taser because, again, it is merely resistance designed to thwart the officer’s orders, not to cause harm.  Will this really be integrated into the NOPD’s elusive policies and procedures manual?

And even in cases where the use of a Taser is justified by aggressive resistance, we don’t want tropes like “it looked like there was something in his pocket, “ i.e. where a suspect was described as a probable physical threat for dubious, scarcely credible reasons.  Will this type of fraud define the use of Tasers, or be a rare exception?

Finally, there is a question of whether the NOPD will be open in this process and actually apply the policies as written, or bend over backwards to defend any use of force.  The record is, frankly, not very good on this score.  In order to even see the NOPD’s policy manual, the department forces citizens to submit a public records request, and the city is generally slow in responding to these – if it responds at all.  Likewise, after Henry Glover’s bizarre death and the Danziger Bridge shootings, it’s difficult to gainsay assertions of a Blue Wall within the department.

We’re spending $600,000 of taxpayer money to purchase more Tasers for the department, which is only a good investment if the policy and its implementation are handled properly. The expanded use of Tasers by the NOPD will only work if the consent decree works and is followed to the letter.  Otherwise, any of us could be in for a shock.

10 thoughts on “Owen Courreges: Can we trust the NOPD with more Tasers?”