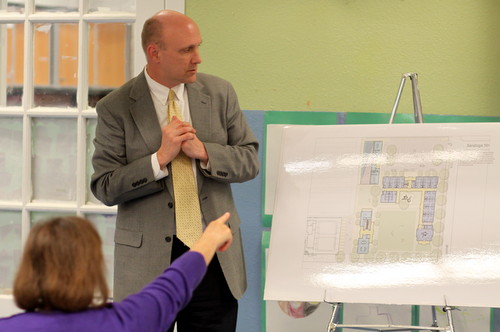 Dale Smith, associate head of school at Newman, listens to a question about a sketch of the new L-shaped preschool building planned for the corner of Soniat and Danneel at a Tuesday night meeting of the Freret Neighbors United. (Robert Morris, UptownMessenger.com)

Officials from the Isidore Newman School envision a new, larger preschool building on the Soniat Street side of campus to open in 2014, as well as the renovations to athletic and science facilities farther down the road, they told the Freret Neighbors United group Tuesday evening.

Members of the association, meanwhile, are continuing preliminary discussions about creating a security district to increase the number of officers patrolling the area.

The Newman vision
Associate Head of School Dale Smith, who will take the lead of Newman next summer, described a plan to build a new early childhood center in the same location its current Greenie House, but expanding it from its current 60 spaces to have room for about 150 children from the age of six weeks to 4 years old. The current facility was originally intended as a preschool for children of faculty and staff, but as demand for early childhood education has grown, Newman needs to expand its capacity, Smith said.

No architect has been hired, but the building on Soniat near Danneel is currently planned to be an L-shaped building with room for 12 classes and a larger indoor gathering area, Smith said. There will be an outside play area as well, and the project will include reworking the Soniat-side entrance to the campus, to make the entire area more aesthetically pleasing, Smith said.

Smith’s presentation drew a number of questions, particularly about parking and the dropoff and pickup plans for students. Smith replied that while he doesn’t have an exact number of new spaces yet, Newman’s current enrollment is about 900 students — down from a maximum of 1,250 — so its impact on the neighborhood has actually reduced. Even so, resident Jane Dimitry urged him to consider that more room for students should be accompanied by more parking for teachers and parents, and Smith promised to take that into consideration.

Noticing that the building is planned to face the interior of the Newman campus, Neighbors United president Andrew Amacker asked Smith to ensure the Soniat street side does not look like the back of a building, to preserve the streetscape. Smith said that they are planning for a single-story building with lots of windows to let in light to avoid an institutional look, but that the project overall should improve the appearance of the street.

“It’s early,” Smith said. “What we didn’t want to do is have architectural drawings and have it done. We wanted to give you a vision, and get some feedback from you.”

The school hopes to hire an architect by December, and to have some initial drawings by February or March, Smith said.

The school has two other long-term facility projects in mind as well, Smith said. The athletic facilities around the stadium need improvement, such as a new entrance and a “desperate need for locker rooms,” he said. Following that, the school’s science center on Jefferson Avenue will also need renovation and upgrades, he said. All of those projects may be presented to the city at once, Smith said, but the early-childhood center is the priority, and the other two are longer-term fundraising goals.

Security district
Kellie Grengs of The New Freret business and property owners association also led a short discussion of the proposal for a security district in the area. The idea has been a topic of conversation for years, she said, but it began taking a more concrete shape after a recent burst of nighttime gunfire in the neighborhood that did not draw any police response despite five or six 911 calls from various residents.

With dozens of security districts around the city, the process to create one takes a year or two but is fairly well defined, Grengs said: Hold a series of community meetings to determine where the boundaries should run and how much extra security patrols residents are willing to pay for, draft state legislation to authorize a fee of a few hundred dollars per year on property in the district, and take it to the voters in the district in an election.

“There’s a template to do this,” Grengs said. “We’re not reinventing the wheel. This security district thing is not a foreign object to New Orleans.”

Grengs said she does not have any specific opinions yet on what the boundaries of the district should be; that will be dictated by which parts of the neighborhood want it. She doesn’t expect the fee to generate enough money for 24-hour extra security at first, but more likely just part of the day or night that residents feel it’s most needed. Finally, she said, using private security firms or off-duty NOPD officers both have their own pros and cons, but she does feel that whomever is chosen should have the same individuals patrolling consistently.

“I’m looking for getting a patrol that knows the people in the neighborhood,” Grengs said. “They kind of get to know your routine.”

The short ensuing discussion brought a divergence of opinions. Jane Dimitry said her experiences with private patrols in other neighborhoods have not been good, as they haven’t come when she’s called for escorts to check on alarms going off at her property, for example. Further, they cannot show in a statistical way that they reduce crime, she said.

“I’d much prefer we raise the taxes for the police department and get protection for everybody,” Dimitry said.

Andrew Amacker said he worried that a private security patrol would have the negative effect of encouraging NOPD to decrease its own patrols, but that he was hopeful the private patrols would be aware of that and pick up the slack. Likewise, resident Jason Miner said that while 100 percent of crime can’t be prevented, a private patrol might deter some of the more blatant issues on the street.

“I’m optimistic that it would deter people who are just loitering and dealing drugs,” Miner said.

Tuesday was only the second discussion of the idea by Neighbors United. Grengs said that more specific meetings about it, with more specific consideration of possible boundaries and fees, will start soon.